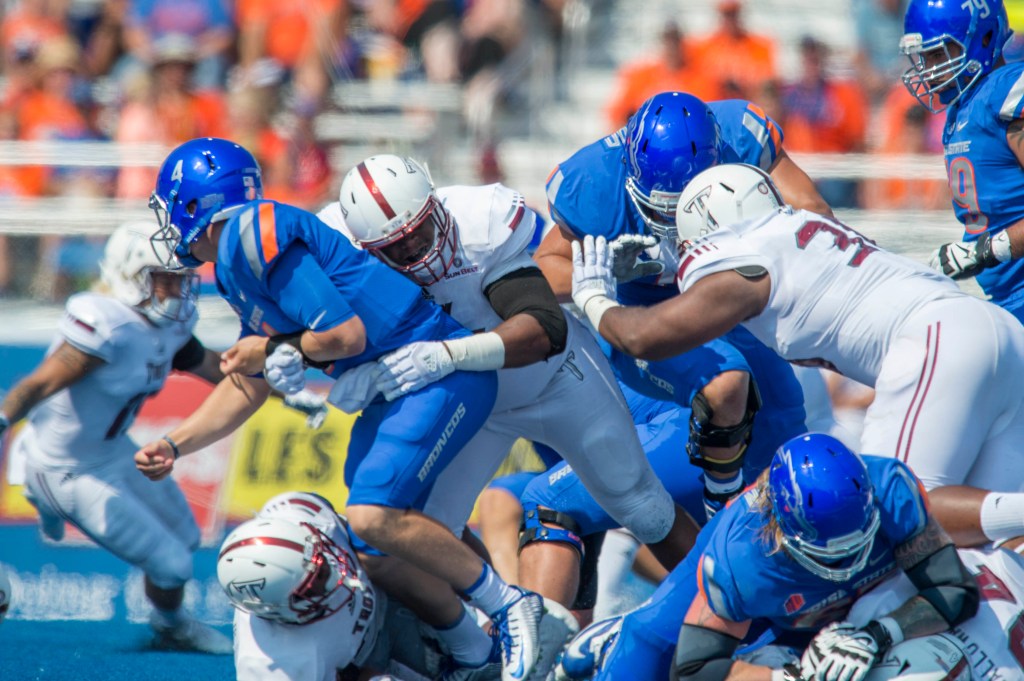 Submitted Photo Despite falling to Boise State 24-13 on Saturday afternoon, the Troy defense had some bright moments against the Broncos. The Trojans will have their home opener against Alabama State this Saturday.

Despite falling to Boise State 24-13 in the season opener on Saturday afternoon, the defense showed they had the potential to once again be a strong unit in 2017.

The Trojans entered the 2017 season with high expectations, partly because they had one of the top defensive units within the Sun Belt Conference a season ago.

On Saturday, the Trojans allowed 357 total yards, but only allowed two offensive touchdowns. The Broncos also had a punt returned for a touchdown for their first score.

“I’m really proud of how our guys competed and played,” said Trojans head coach Neal Brown. “We played a ton of guys; almost everybody we brought on defense played. We’re going to consistently play good defense here. We’re going to be great on defense at some point this year. We flew around, we played with passion, we played with energy, and I was proud of those guys because that’s how Troy football should look.”

Melvin Tyus and Sam Lebbie had productive days for the Trojans finishing with seven and six tackles respectively.

“Melvin Tyus played his best game not only from a production standpoint but he was our best communicator in the secondary,” Brown said. “He got our guys lined up and there’s probably not a guy that I’m more proud of than Melvin.”

Tyus showed that same type of production throughout the summer and fall camp.

“He did a great job. I’m so proud of Melvin. Not just playing, but he had a great camp,” said defensive coordinator Vic Koenning. “He’s matured. The thing that probably sticks out to me with Melvin is … See, I started putting him in with Tyler Murray so that I had an experienced guy back there. Tyler wasn’t quite listening to him like he wanted him to. I had never seen Melvin with so much passion as he did when he came over and showed good leadership on the sideline.”

For Tyus it was all about being positioned in the right area to make the tackle when needed.

“Coach Vic did a great job of preparing the defense. All of us played well,” Tyus said. “When I had a chance to make a play, I made the play. That’s from Coach Vic. He prepared us, and we went out there and made plays.”

Despite limiting the Broncos to 134 yards in the second half, the Broncos were able to put the Trojans away when Jake Roh hauled in a seven-yard touchdown pass from Montell Cozart. Brown blamed fatigue.

Lack of proper conditioning is to blame for the Trojans fatigue late in the game according to Koenning.

“There no excuses,” Koenning said. “We knew going into our game that we had so many practices missed going into the game. Every time we’d get ready to do any kind of conditioning after practice it seemed like all the guys that needed it were over with the trainer. That had become an issue and a concern.”

The Trojans will host Alabama State in their home opener at 5 p.m. on Saturday at Veterans Memorial Stadium.