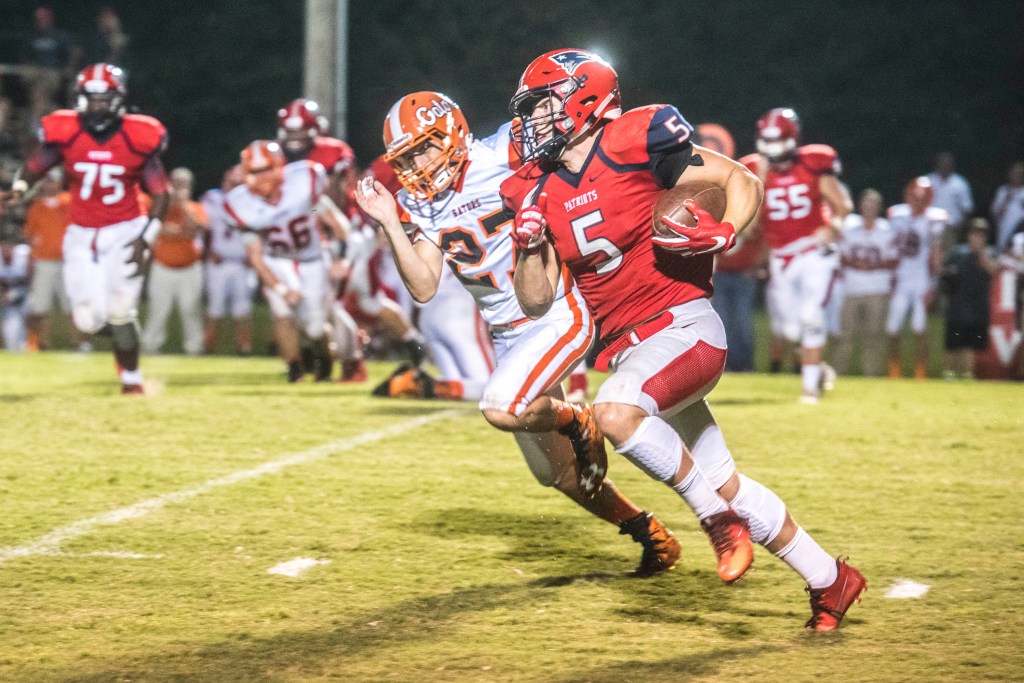 Reed Johnson runs the ball for the Pike Patriots against Clarke Prep earlier this season. Johnson and the Patriots return home Friday night to take on rival Fort Dale

The Pike Patriots head home to begin region paly this Friday night when they take on rival Fort Dale Academy.

“We are still beat up from the other night,” said head coach Gene Allen. “We have had a couple good days of practice so far. Hopefully we will hit off the next couple of days and be ready to play.”

The Patriots defeated a talented General team 42-40 a week ago in a game that went into overtime.

“It was a very physical game,” Allen said. “Offensively we kind of ran it at them and we did a really good job of knocking them off the ball and getting some yards. Two backs getting over 100 yards, it was a pretty good night.

“Defensively we were where we were supposed to be most of the time we just missed a lot of tackles. We knew their skilled guys were good, but we have to do a better job tackling this week.”

This week the Patriots welcome in a rival and a region foe in the Fort Dale Eagles.

“It’s fun and a big rival game, but it’s also a regional game,” Allen said. “You have to remember what is going on and what is at stake. You have to treat it like a playoff game because you can’t afford to lose a region game. We know Fort Dale is going to be physical, they always are we are just going to have to come out and match them.”

The Eagles come into the game with a 2-0 record after defeating both Evangel Christian and Wilcox Academy. In the two wins they have averaged 41 points.

“They got some good players,” Allen said. “Their quarterbacks are very good. They are competitive and they do a good job reading their offense. You have to make sure you reading your keys. If you don’t they are going to have some big plays.”

The Patriots have averaged 39 points per game in their three wins this season and they have leaned heavily on their running game to do so.

The Patriots have struggled traditionally against Fort Dale, losing to the Eagles in 13 out of their 19 games. The Patriots did defeat the Eagles last season 41-15.

Friday’s night’s game begins a stretch of tough game for the Patriots. After playing the Eagles, the Patriots play on the road at Monroe, Glenwood and Autauga. Those three team accumulated a record of 32-6 a season ago.

“These next four or five games are going to be physical,” Allen said.” You have another region game against Monroe who is traditionally one of the top two teams in the state. Then you Get Glenwood who is reloading this year and then you get Autauga who everyone knows has the players. The next four weeks are going to be tough.”

Kickoff between the Eagles and Patriots is scheduled for 7 p.m.