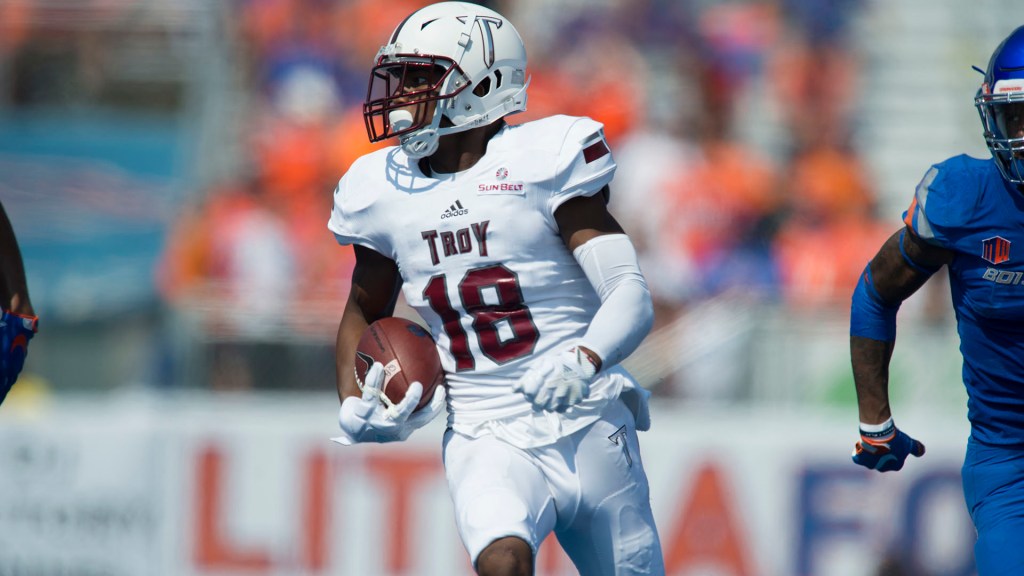 The Troy Trojans struggled offensively for much of the afternoon in their 24-13 loss to the Boise State Broncos on Saturday afternoon. Cornerback Blace Brown provided some fireworks when he picked off a Brett Rypien pass and returned 53 yards for a Trojan touchdown to get the Trojans to within four in the final two minutes of the first half.

In a game that was without many big plays, Troy cornerback Blace Brown provided a highlight reel play during Troy’s 11-point loss to Boise State on Saturday afternoon.

The Broncos had all the momentum throughout the second quarter on Saturday afternoon. They held a 14-3 lead and driving for another score to extend their lead either to 14 or even 18.

Brown picked off a Brett Rypien pass and ran it back 53 yards for a touchdown to give the Trojans life while cutting their deficit to four at 14-10 in the final two minutes of the half.

“It just came from film study,” Brown said. “I saw the same route multiple times, knew it was their favorite route and jumped it.”

The Trojans offense had only accumulated 54 yards of offense up that point and the team was looking for a spark. It looked like Troy would be lucky to go into half trailing by 11 points before Brown made what head coach Neal Brown called the play of the game.

Brown is fairly new to the cornerback position. In 2016 Brown transferred from wide receiver and made an instant impact on the Trojan defense. As a sophomore Brown ranked seventh nationally and led the Sun Belt conference in interceptions with six. Even with his success, Neal Brown believes on Saturday he looked like a true cornerback.

“Last year he was just kind of freelancing and made some plays, made some interceptions. In the game on Saturday

“He really played like a true corner,” Brown said. “Played with good technique. He was matched up against the Wilson kid, No. 1, I think he had four catches., two of them weren’t on Blace. But I’m very proud of him. He had a good spring, solid summer, was really good, our best cover guy all fall camp. For him to get that opportunity and make that play was big.”

“I couldn’t even tell you. It’s been that long. It’s been like three years now,” Brown said. “It’s been so long, but it kind of feels the same. I’m hoping to do it a few more times, helping out the defense. Hopefully the rest of our guys will do the same thing.

Brown feels at home at the cornerback position and with a little more work defensive coordinator Vic Koenning believes there is still room for improvement.