Down to the wire: Bulldogs pull out the win in final minute 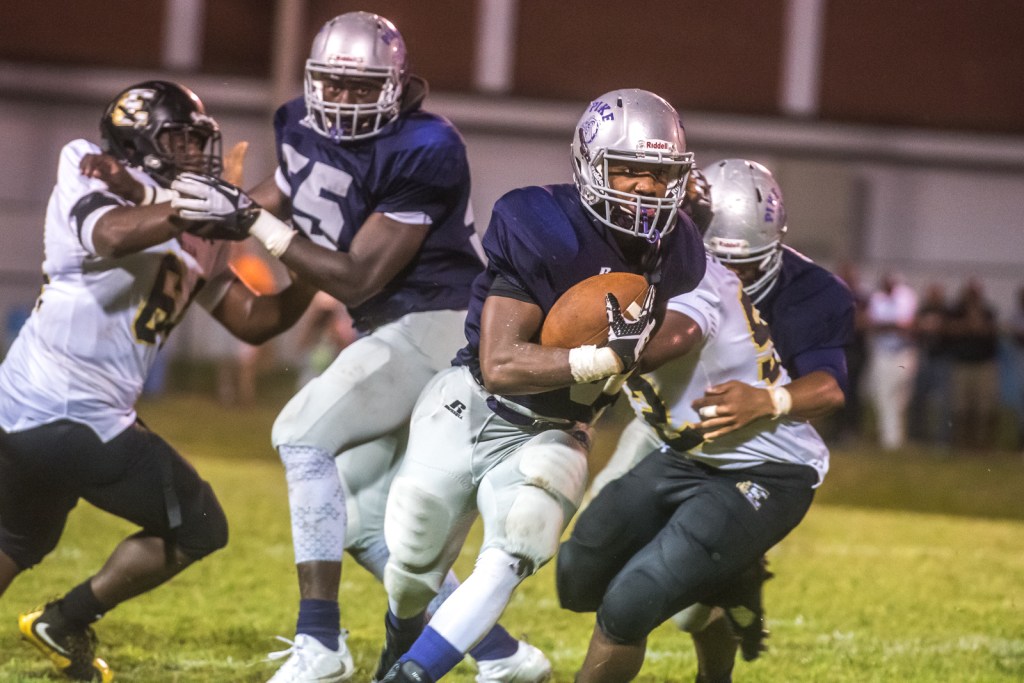 Jahzarian Lampley (5) runs the ball for the Pike County Bulldogs on Friday night. Lampley and the Bulldogs defeated the Elba Tigers 25-24 after Rayshawn Reynolds hauled in a touchdown pass in the game’s final minute.

Rayshawn Reynolds scored from 26 yards out with under a minute left to play to give Pike County a 25-24 win over Elba in the season opener on Friday night.

The Bulldogs turned the ball over three times, but fought their way back to get the win.

“We knew Elba was going to be extremely tough,” said Bulldogs head coach Fred Holland. “We knew it was going to be a close ball game. We just wanted to play four quarters and that is what we did.

“We had some ups and downs and we had some plays we didn’t complete the right way, but overall, our guys did a great job tonight.”

Bulldogs quarterback Jaidyn Wilson completed four passes all night, with three of them coming in the final drive.

“He is a great kid and he works very hard,” Wilson said. “He had a couple of ups and downs in the game. He did it when we needed it. That’s what we have been striving to do.”

The first half was riddled with turnovers for Pike County Friday night. The Bulldogs turned the ball over two times on a pair of interceptions. They also had one blocked punt that lead to a Tiger touchdown and a bobbled snap on the next punt.

Even with all the mistakes in the first half, the Bulldogs found themselves down by just 10 heading into the locker room at half time.

The Tigers scored their first touchdown when the Bulldogs long snapper tossed the ball over the punter’s head and into the end zone. The punter attempted to kick it away, but it was blocked and covered for a touchdown. After a successful two-point conversion, the Tigers took the early 8-0 lead.

The Tigers extended their lead to 16-0 when they scored with just under eight minutes to go in the half.

On their next possession, the Bulldogs went on an eight-play drive ending with a five-yard touchdown run by Jahzarian Lampley. The Bulldogs, for a moment, brought the score to 16-8, but an illegal procedure was called after the successful two-point conversion– forcing the Bulldogs to retry. They failed and the score remained at 16-6.

After turning the ball over again to begin the second half, the Bulldogs forced one of their own. Rayshawn Reynolds scooped up a Tiger fumble and ran it back for a 55-yard touchdown. After a failed two-point conversion, the Tigers led the Bulldogs 16-12 with 5:54 remaining in the third.

The Bulldogs got a big 55-yard run by Lampley in the fourth quarter, setting up a Jaidyn Wilson two-yard touchdown. After another missed two-point conversion, the Bulldogs grabbed an 18-16 lead with 10:29 remaining in the game.

The Tigers quickly responded on the ensuing kickoff, taking it to the distance to regain the lead at 23-18.

The Bulldogs began their final possession on their own 18-yard line with 1:55 remaining. Reynolds had his first big catch of that drive for 23 yards. After a sack, Wilson connected with Elisha Green on a 29-yard completion. After a four-yard run by Darrick Myhand, Reynolds became the hero with his 26-yard touchdown completion.

“It was a big play,” Holland said. “He has been coming along, working really hard. I knew he had a chance and he caught it. It gave us momentum and we held them at the end.”

The comeback would not have been complete without an extra point by Green to cap off the win.

Wilson finished the night with 87 yards passing and two touchdowns. Reynolds led the way hauling in 60 yards as a receiver. Lampley lead the rushing attack with 90 yards on nine carries.