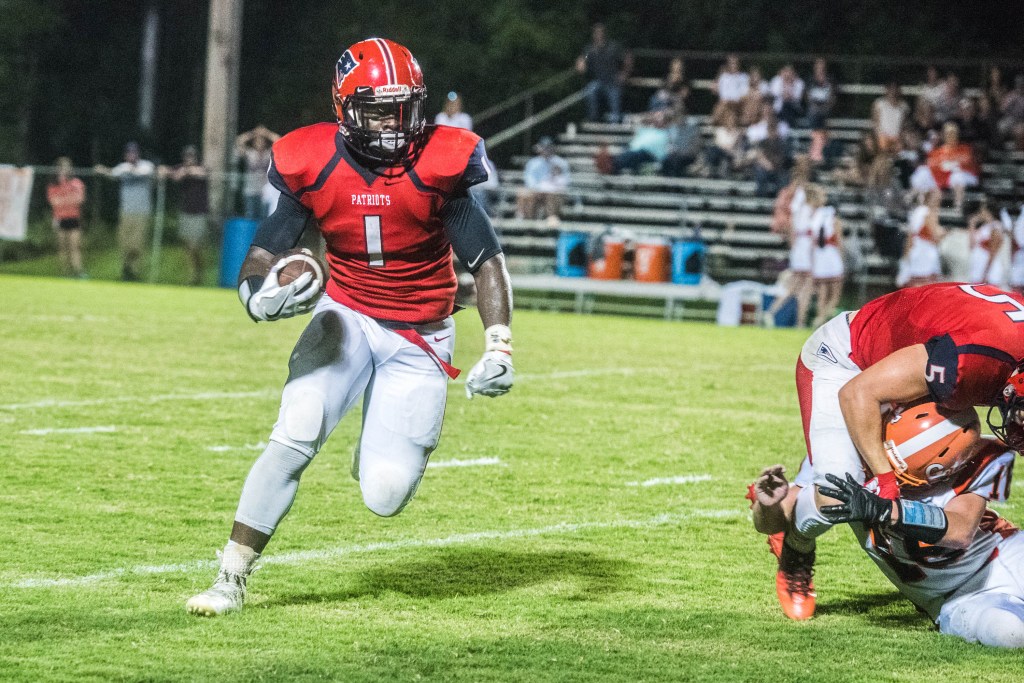 With the win, the Patriots improve to 2-0 on the season. The Patriots jumped out to an early 14-0 lead, but found themselves up by only 8 in the fourth quarter before pulling away late.

“They exposed some things that I didn’t think we had,” said head coach Gene Allen. “We need to work on some stuff and try to correct it. I thought we showed some guts at the end. I thought our kids played hard, but we have to play four quarters.”

T.K. Thomas scored two first half touchdowns for the Patriots and Pike went into the locker room 14-0.

The Patriots scored on their opening drive of the ball game Friday night. Thomas helped extend the drive when he took a fourth down handoff and ran for 19 yards and an easy first down. Thomas rushed for 46 yards alone during the opening possession including a three-yard touchdown run to give the Patriots the early 7-0 lead.

The Patriots special teams made a big play on the kick when they popped the ball in the air and Cody Hollis batted the ball into the waiting arms of Jade Sikes.

Unfortunately for the Patriots, Reed Jinright threw an interception on the opening play, giving possession right back to the Gators.

Both defenses held up to end the quarter and the Patriots took a 7-0 lead into the second quarter.

During the opening drive of the second quarter, the Patriots marched down the field in five plays and scored on a 20-yard touchdown run by Thomas, his second of the half.

The Gators scored on the opening possession of the second half and immediately cut their deficit down to 8 at 14-6 when they connected on a 52-yard touchdown completion.

Two possessions later, the Gators went on an 18-play drive and took it inside the Patriots three-yard line. The Patriots held them back to hold onto their lead heading into the fourth quarter.

On their next possession, the Gators went three-and-out and when they tried to punt, the punter caught the snap with a knee on the turf, giving the Patriots possession at the Gator 22.

The Patriots took got a little more breathing room when Jinright rolled out to the right and connected on a 20-yard touchdown pass to Sikes to give the Patriots a 21-6 lead midway through the fourth quarter.

The Patriots went on a 10-play drive in the game’s final minutes and went up 28-6 on Cody Hollis’ one-yard touchdown run.

Jinright finished the game completing 6 of his 10 passes for 32 yards and one touchdown.

In his Pike Patriot debut, Thomas finished the game with 110 yards on 14 attempts with two touchdowns.

Thomas spent most of the time lining up in the wish bone along with Reed Johnson who finished with 74 yards on 12 carries.

Football is back: Coaches welcome in the new season…