‘A blessing’: Pitts earns scholarship after spending three seasons as a walk on 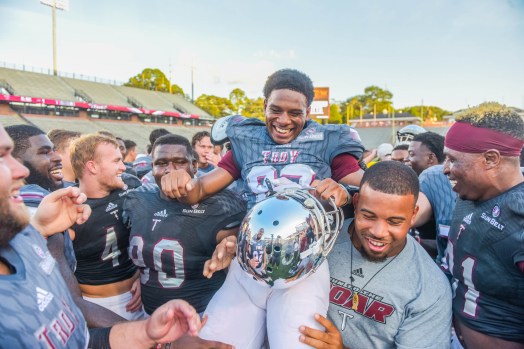 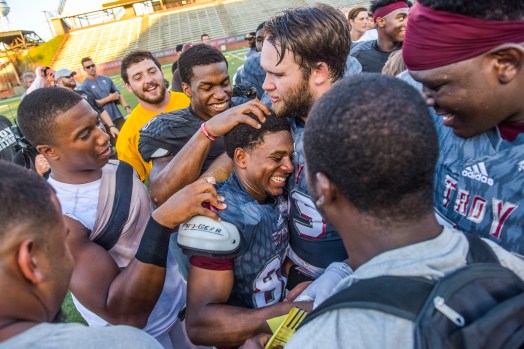 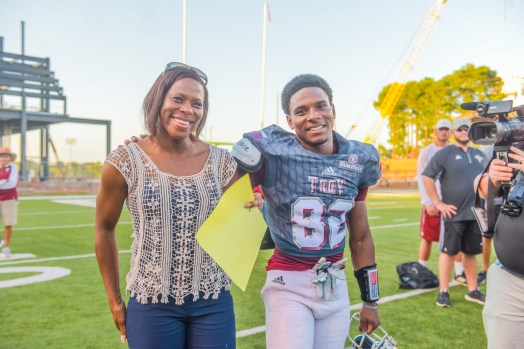 After three seasons on the scout team, a dream came true for Troy Trojans walk-on KE’Marvin Pitts Friday night when he officially signed a scholarship for his senior season.

Pitts was one of four players to be awarded with a scholarship joining Gabe Hill, Zacc Weldon and Hunter Reese.

“It was a blessing,” Pitts said. “It was a process. I knew my role and that was to play on the scout team and be a good teammate. My goal was to do the best that I can to help the team win. For me to receive the scholarship was a blessing and I thank God.”

Being on the scout team is a constant grind for players like Pitts. Along with the scout team offense, Pitts helps run the opposition’s plays in order to get the defense ready for the game.

Working on the scout team gives Pitts an opportunity to not only help the first team unit, but himself as well. He gets to shore up his game fundamentally while building his mental and physical toughness

“It’s what you make it,” Pitts said. “You can either embrace it and be thankful or you can complain and not get anywhere. I was just all in from the start, but it was hard and a grind for sure.”

Once Pitts realized what his role was, there was no turning back.

“It was awesome to know that if this is what it takes to win and for Troy to have success, then I am willing to do my part,” Pitts said. “It was cool.”

When it was announced that Pitts had earned a scholarship, his teammates lifted him up and chanted “Rudy”. Pitts has drawn comparisons to the character from the popular movie.

“It was funny and cool when everyone started to chant that,” Pitts said. “Just being able to live that moment with those guys and for them to be happy for me shows a lot about the team and how supportive we are for one another.

“We are a family. You have to celebrate the blessings and embrace the good times and the bad times. That time was definitely a good time.”

Like Rudy, it’s not always been easy for the Georgia native. He lost his father when he was 15 years old and not being able to share his journey and experiences with his father has been tough.

“My dad isn’t physically here to walk with me through college and this experience,” Pitts said. “I was blessed to have a good father. Not having him there physically, not being able to call him and tell him how my practice went hurt. At the same time, God was using that to make me stronger and make me rely more on Christ.”

It’s Pitt’s faith and mother that helps him get through.

On the field, the hardest thing for Pitts was to have patience and know that it’s a process.

“You have to remind yourself of that,” Pitts said. “When it’s my time, God will open that door. You build a lot of patience. The hardest thing I had to do was be patient.”

Faith has played a big role in both life and football for Pitts.  James 1:17 is a bible verse that means a lot to Pitts and it’s one that he reads often. It states “Every good and perfect gift is from above.”

“It’s hard to wait on God, but it’s always worth it,” Pitts said. “During my time here, during the grind of being a walk-on and being a Troy football player in general, God has taught me how to have patience and how to fight through adversity, how to buy into the whole program and not focus on just KE’Marvin; it’s not just about me– it’s about the program and the University.”