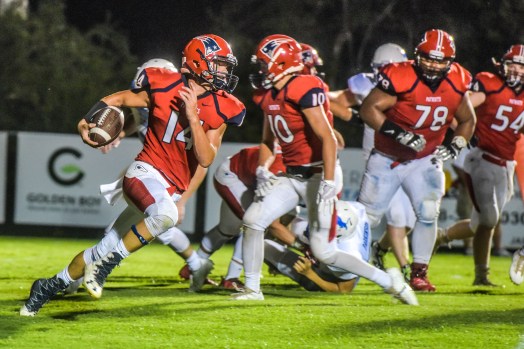 Messenger Photo/Jonah Enfinger Reed Jinright runs the ball for the Patriots during their 47-8 win over Kingwood Christian on Friday night. 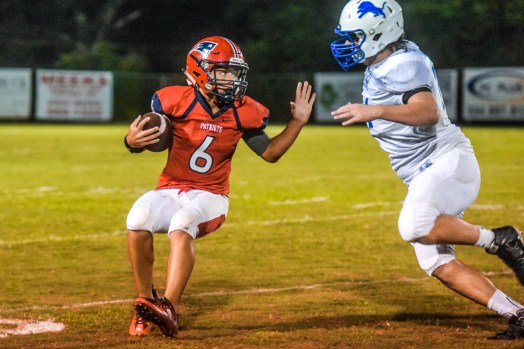 The Pike Patriots scored in every first half possession on Friday night and cruised to a 47-8 win over Kingwood Christian in the season opener.

With the comfortable lead, the Patriots were able to empty their bench in the second half.

“It’s always good when you can play everybody,” said head coach Gene Allen. “We still made a lot of mistakes and we have a lot we still need to work on. I was pleased with the conditioning and we had a few too many penalties.”

The Patriots were able to give Jinright a breather in the second half and Drew Nelson came in and led the Patriots down the field for their final touchdown of the night.

“Drew is one of those kids that likes to work,” Allen said. “He practices with us every day before he goes to JV practice. He is a very coachable kid and he works as hard as anybody I know. He is going to be a tremendous player.”

The Pike Patriots scored a touchdown in all six of their first half possessions and rolled to a comfortable 34-0 lead at the break.

After holding the Lions to a three-and-out to begin the game, the Patriots embarked on a six-play drive capped off by a 30-yard touchdown run by Reed Johnson and the Patriots grabbed an early 7-0 lead with 7:22 remaining in the first quarter.

It only took two plays in the Patriots’ second drive of the game. After a two-yard run by Johnson, Nate Renfroe hauled in a pass by Reed Jinright and took it 63 yards for the score. After a missed extra point, Pike took a 13-0 lead.

Jade Sikes hauled in Jinright’s second touchdown pass and ran it in from 64 yards out to give Pike a comfortable 20-0 lead.

The Lions followed with their most successful drive of the half. After a kick return that set them up on Pike’s 38-yard-line, the Lions were able to get the ball inside the 10 before turning the ball over on downs at the 9.

Again, the Patriots wasted no time. On the second play of the drive, Jinright scrambled 91 yards on a quarterback keep for a touchdown, giving the Patriots a 27-0 lead.

The Patriots closed out their scoring in the first half on an 11-yard touchdown by Camden Koenning to bring the score to 34-0.

After a 30-yard reception by Renfroe, Cody Hollis hauled in a 15-yard touchdown pass to put the Patriots up 41-0.

The Lions scored their only points of the game in the final minutes on a 29-yard pass to bring the score to 41-8 after a two-point conversion.

Nelson ran in from five yards out as time expired to close out the scoring on Friday night.

The Patriots will host Clarke Prep at 7 p.m. next Friday night.

“Last year they were Wing T,” Allen said. “This year I have heard they are spread. I’m not sure they played tonight. We have to take care of us first.”