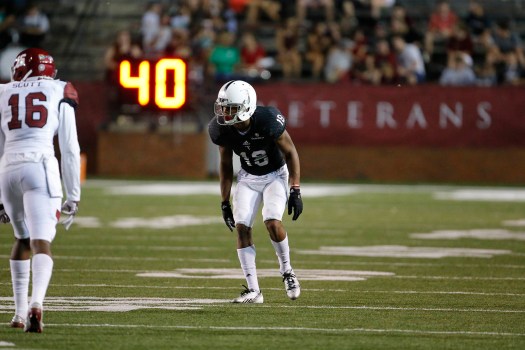 submitted Photo The Troy Trojans are hoping their late success at corner last season carries over into 2017. Above: Blace Brown lines up against a receiver last season. Below: Kamryn Melton finished the 2016 season with two interceptions, 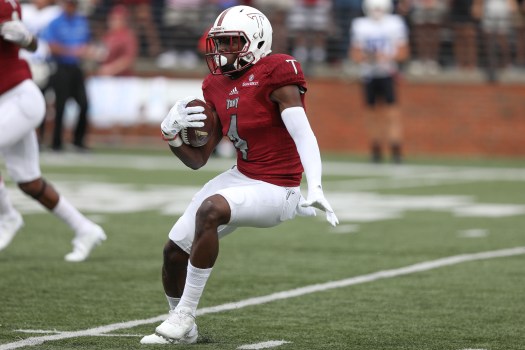 submitted PhotoThe Troy Trojans are hoping their late success at corner last season carries over into 2017. Above: Blace Brown lines up against a receiver last season. Below: Kamryn Melton finished the 2016 season with two interceptions,

Troy University cornerbacks struggled at times a year ago, but as the season went on, they turned into one of the more formidable units in the Sun Belt Conference.

This season, Kamryn Melton and Blace Brown look to lead a young corps of Troy cornerbacks to new heights this season.

“Right now, we are still trying to learn the scheme because we have some young guys still learning” Melton said. “As of right now, we are going up. Each day we are installing new packages and I know they are young, but I am helping the young guys come along.”

“We started off kind of rough, but we have a lot of young guys in there hopefully to get in the mix. They are very talented,” Brown said. “We just have to listen to the schemes and (Vic Koenning) and everything will follow.”

Melton had to sit out the 2015 season after transferring in from Auburn. He had to learn on the fly last season, but by season’s end he had finished with a team-high eight pass break-ups, two interceptions and 36 tackles.

“Last year I had to prove myself and become leader for my group,” Melton said. “Now this year, people are looking up to me and coming to me asking how do I do this or that? Now I know the answer.”

“The job that he has done on the field coaching the young guys…Every time I get ready to say something, Kam has them before I can get there,” said defensive coordinator Vic Koenning. “He knows what the position needs to do. He has done a great job at taking those young guys under his wing.”

Like Melton, Brown saw his first action in 2016 and quickly turned some heads. He finished seventh nationally and first in the conference in interceptions with six.

Known as the “Riverboat Gambler” by Koenning, Brown had a knack for being around the football last season.

“That’s good and bad,” Brown said. “Me and Kam (Melton) always talk about it; I am kind of a greedy guy. I always like to jump the first route I see being a receiver. It can hurt me also. I have learned to follow the scheme.”

The Troy defense allowed 277 passing yards per game over the first eight games last year, but in the final four games they brought that number down to 209.

“We gave up too many yards,” Koenning said. “Some of those yards were in the second half of games when we were pretty far ahead. We have to make a lot of improvement from last year. In the big picture, we have. Our guys will tell you right now we are preparing for Georgia Southern, Boise, New Mexico State and LSU. Every day they are seeing a new package.”

The Trojans secondary ha as hard challenge right out of the gate this season playing Boise State and LSU in weeks one and five.

“Boise is going to be a big game for us period,” Melton said. “It’s the next game. The players always talk about how that’s going to set the edge. If we get a ‘W’ with that, we will be battle tested.”

With it being the first game of the season, Melton believes the excitement will help the Trojans.