Plenty of hype: Led by Silvers, Trojans strong at quarterback 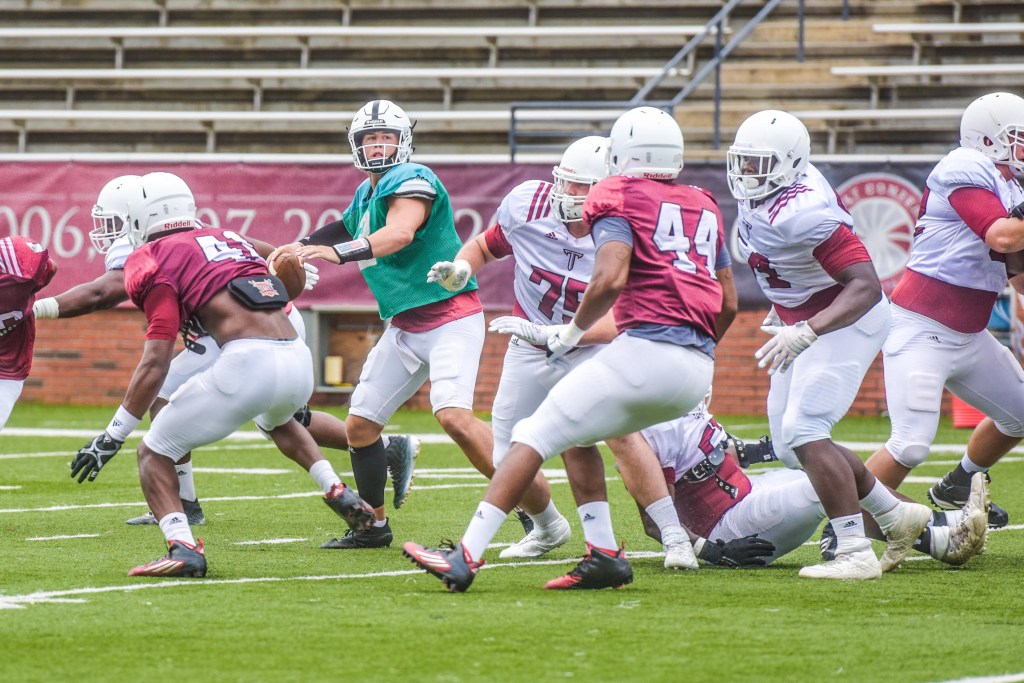 Photo/Mike Hensley Led by Brandon Silvers, the Troy Trojans are excited about what they have at quarterback heading into the 2017 season. Silvers and Troy will open the season on the road against Boise State.

The Troy Trojans have high expectations for this upcoming season and quarterback play is a big part of the reason why.

Led by redshirt senior Brandon Silvers, the Trojan offense has the potential to be one the best in the conference this year.

Silvers had a career season a year ago, completing 64 percent of his passes and throwing for 3,180 yards with 23 touchdown passes. Those numbers earned him a spot on the 2016 All-Sun Belt team and this season, head coach Neal Brown doesn’t see a reason why he can’t continue his progression.

“His maturity continues,” Brown said. “His daily work ethic and attention to detail in practice is night and day compared to what he was three years ago. He is moving into his fourth year as starting quarterback. I think the list of guys that have his experience, that have his statistics, that have his athletic ability in college football– I think that is a short number.

“I think what you will see is he will make the same jump he made from his sophomore to junior year to his senior year. I think he will be one of the top quarterbacks this year.”

People around the country seem to agree. Silvers has been put on the watch list for the Davey O’Brian Award, the Johnny Unitas Golden Arm Award and the Maxwell Award.

“Once we get on the field, we don’t concentrate on I’m on this or I’m on that,” Silvers said. “We are all on a team. It’s doesn’t matter if we are on a watch list or what preseason accolade you get. That is preseason. After that season, that’s good.

I wasn’t on any of the preseason All-Sun Belt teams last season. I wanted to be first-team quarterback and I did that.”

The Trojans also have two backup quarterbacks to fall back on if need be. Cam Barker and Sawyer Smith both saw game action as freshmen last season.

“I think we have three quarterbacks that can win in this league,” Brown said. “Caleb Barker came on all spring. I think things happen for a reason and Brandon hurting his finger’ probably long-term and program-wise, was probably a good thing. Caleb Barker and Sawyer Smith got every rep. Caleb really transitioned and really grew. Sawyer is one of our most improved players this camp.”

Having weapons on the field will help any quarterback, and this season it looks like Silvers might have weapons all over the field.

“Last year, we didn’t have the speed down the field, so we couldn’t make the vertical plays,” Brown said. “This year, we have a lot of guys and we can spread the ball deep.  Having the playmakers that I have around me is incredible.”

The Trojans made national headlines a year ago by nearly knocking off the eventual champions in Clemson. This year, they will have the same opportunity when they travel to play both Boise State and LSU.