Down the stretch: Trojans look to build on strong start to camp 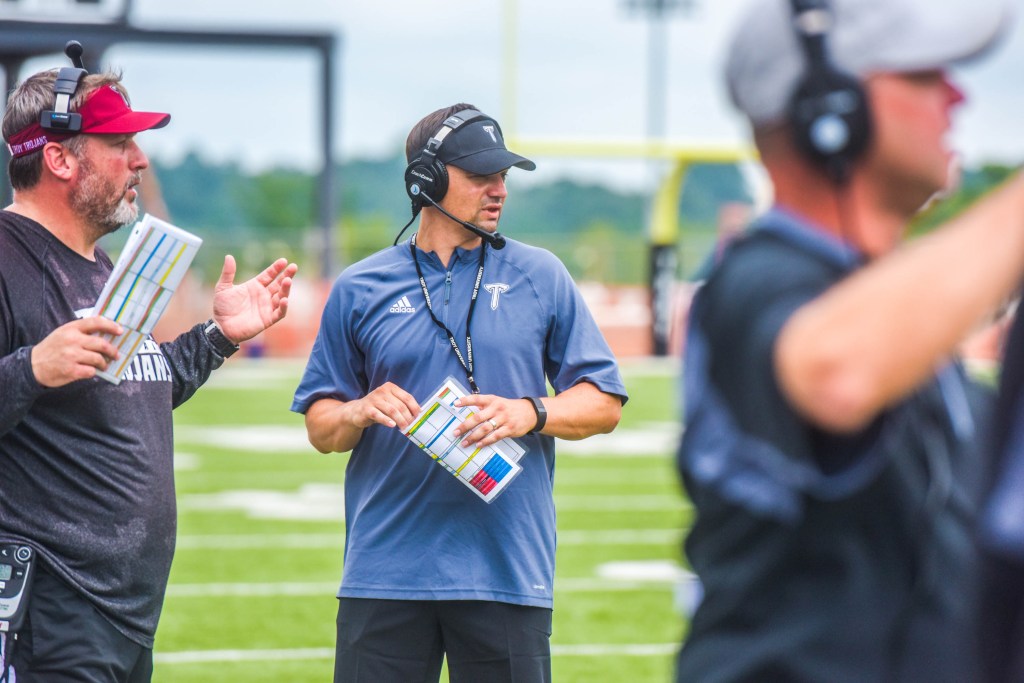 Messenger Photo/Mike Hensley With just under three weeks until Troy kicks off the 2017 season on the road against Boise State on September 2, the Trojans hope to build off a strong start to camp.

The Troy Trojans have one week remaining in fall camp before they officially begin preparing for the September 2 season opener in Boise State.

By now, the noise about last year’s 10-win season is well heard, but the team’s expectations continue to grow.

“We have raised expectations in our program,” Brown said. “That is to be expected coming off a 10-3 season, but we have to turn the page. Those expectations are welcomed; it’s our genuine belief that we are building a program here.”

Last season’s 10 wins come on the heels of a 4-8 record in 2015. The Trojans don’t plan on being complacent; they want to keep moving forward and keep their eyes on the present and future.

“We don’t want to be known as one-hit wonder,” Brown said. “We want to be a program that is annually in contention for a Sun Belt Conference championship.”

The success has not only bred success locally in Troy, but in Montgomery, Dothan, Pensacola and all points in between. That became clear when the Trojans held their Trojan Tour in those locations this summer.

“The area we need to dominate in our area is the Montgomery to Dothan 231 corridor in the wiregrass area,” Brown said. “This is our home base for fans. It’s an area that I hope continues to grow as a Troy fan base. We have several commitments from that area going into next season.”

On the field, the camp has been a process. The Trojans still have a handful of players dawning the yellow jerseys on the sideline meaning they are limited participants. Brown however expects most of them to be ready for the season opener against Boise State.

“We have a couple guys coming off knee injuries this spring,” Brown said. “We are going to leave them out of contact work until we get in the fall. Everybody you see in yellow jerseys with the exception of maybe one will be ready.”

With the first scrimmage in the books, the Trojans will stay in camp mode for one more week until they participate in the second scrimmage of the camp on Friday night.

“We are expecting a good student turnout,” Brown said. “I think we will have a good crowd. We had about 500 students in the spring and I think we will be upwards of that number this time.”

It’s this time of the camp that is most pivotal for Brown. It’s time where his players can help make their season a success.

The Trojans will have to be tough both physically and mentally against Boise State.

“They are disciplined, they are tuff, offensively they give you a ton of different looks,” Brown said. “I think their quarterback is talented. I think our quarterback matchup in the first game is one of the best in all of college football on opening week.”

The Trojans will begin their second scrimmage of the camp Friday beginning at 5 p.m.