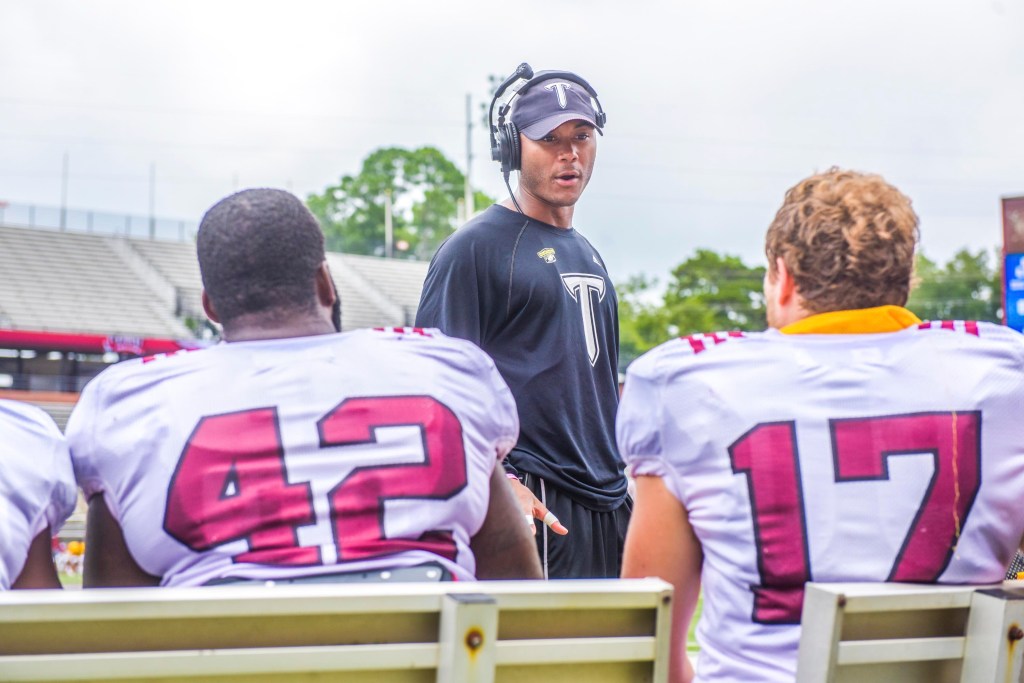 Messenger Photo/Jonah enfinger The Troy Trojans held their first of two scrimmages on Saturday morning at Veterans Memorial Stadiu. They will participate in their second scrimmage on Friday night.

Head coach Neal Brown believes that weeks two and three of any fall camp is what makes a season, and after getting back into the swing of things in week one, he feels like his team has answered the call.

“We are 13 days into camp and I like our football team,” Brown said. “Our football team is talented. We are unproven in a number of spots, but I think we are heading in the right direction.”

On Saturday, they got to put their hard work in camp to the test. It was the individual success of some key players that jumped off the page for Brown.

“I thought Josh Anderson offensively had a good day,” Brown said. “He has continued to have a great camp. He is playing his best football he has played as Trojan. (Brandon) Silvers looked sharp. He is a good player, even though he hasn’t necessarily played very well in scrimmages. I thought today he stepped up and threw the football very well.”

On the defensive side of the ball, it was the second string that caught the eye of their head coach.

“I thought the twos on defense did some good things,” Brown said. “I liked the ways we started the second half defensively with the ones. I thought we got in the backfield. Antoine Barker had a couple tackles for loss and a sack today; I thought he was really productive. We batted some balls down and I thought we covered well.”

On special teams, the Trojans struggled with a couple of kicks, but Brown liked what he saw overall.

“Bratcher Underwood made two pressure kicks today,” Brown said. “I am proud of where are two long snappers are. We have to be more consistent kicking the football, but we have an opportunity with special teams to build on what we did last year.”

The Trojans had multiple players that were either limited or didn’t play on Saturday including wide receiver Emmanuel Thompson and running back Jordan Chunn.

“A lot of the older guys, especially the ones with wear and tear on their bodies, we voluntarily shut them down for these scrimmages,” Brown said. “I know what to expect out of those guys. Emmanuel Thompson could have lined up and played today. I know what he could do, he has answered the bell every time we asked him to do it.”

The scrimmage was known as “Moving Day” for coach Brown and it was about having his younger players step up.

“Today was about seeing where some of these guys are,” Brown said. “Offensively, we wanted to see what James Peach could do. He played every snap with the ones at right tackle and held his own. I think it was important for Josh Anderson to go out there and prove that he was ready to take the next step.

“When I talk about moving day it’s about the guys that haven’t necessarily proved themselves on offense and defense in a real game setting yet.”

The Trojans will hold their second camp this Friday night as part of Student Appreciation Night beginning at 5 p.m.