Hungry for success: Eagles look to take next step during 2017 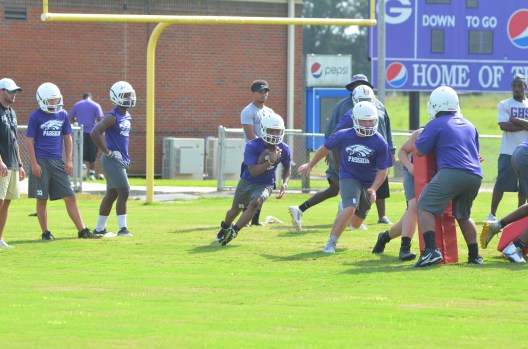 Photo/Mike hensley The Eagles are back on the field for the 2017 football season. The Eagles made the post season for the ninth consecutive season in 2016 now look to take the next step in a talented region. 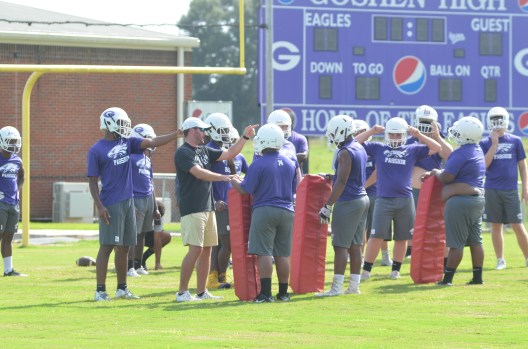 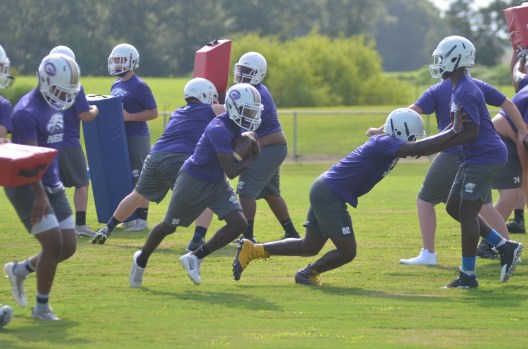 All the pads are handed out and the Eagles have begun what they hope is a successful 2017 season.

“Day one and it’s a typical day one in the land of Goshen,” said head coach Bart Snyder. “Our guys are excited, our coaches are excited; there is a lot of excitement over here. It’s the same way every year and I hope it continues to build like it has in the past.”

The Eagles have made the postseason nine consecutive seasons. With that comes excitement and expectations and this season’s fans are hoping their Eagles could make a run at an area championship.

To make a run at a region championship they are going to have to navigate through a competitive region that includes perennial powers Elba and New Brockton along with dark-horses Calhoun and Luverne.

“There are several teams that could be as good as anybody,” Snyder said. “Elba is the measuring stick. You can’t help but put them where they are. They have won a state championship and they contended for another one. New Brockton, Zion Chapel and you got Luverne. Athletically, you have to deal with Central and Calhoun. At any moment they are good.”

Offensively the Eagles live and die with the run game, and with players such as Damion Passmore, Zack Alford, DaQuon Foster and Cory Peterson all returning, the running game is primed to take another step forward. All of that depends on the progress of a young offensive line.

“They are working extremely hard,” Snyder said. “They are a little inexperienced. We had some guys say they were coming out, but has not shown up yet. We expect them to be here and that is a little disappointing. We have to get people in shape and ready to play. Our guys are working on that.”

Fans are encouraged to come out and watch their Eagles in action and coach Snyder said he hopes when they come out they see a team hungry and enthusiastic about coming out to practice.

“We encourage the fans to do it,” Snyder said. “We like people to watch we think it encourages our young people to play harder and practice harder. We want them to see intensity in everything we do. We don’t want them walking around if they expect to hear some correcting going on. We are going to coach and demand highly of our young people.”

The Eagles will team up with Elba to take on G.W. Long and Wicksburg in a jamboree on August 25 at G.W. Long.