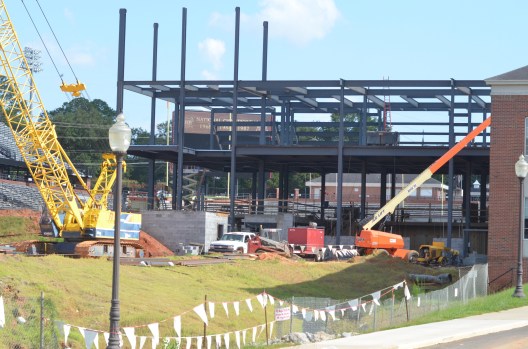 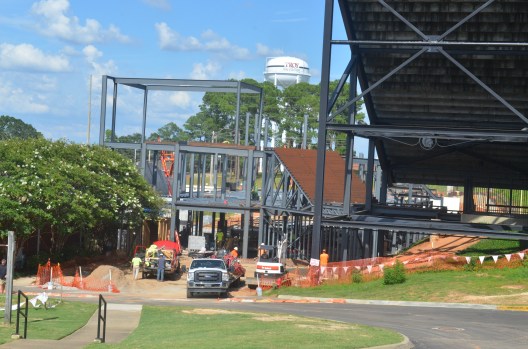 Even though the new end zone facility is a year away from opening, Troy fans can see progress at Veterans Memorial Stadium.

“The past month or so has been really productive,” said Troy Director of Athletics Jeremy McClain. “The weather has cooperated more. The first part of the summer was a little difficult, but they made a lot of progress. We feel good about it; we’re still targeting early summer to get in it next year.”

The new facility will include 70,000 square feet of space, new locker rooms, a weight room, coach’s offices, a player lounge, 402 club seats and a new 35-by-90 video board.

“Everybody is excited. It’s fun to see it start taking shape and you get to see the size of it, how big it’s going to be and how it’s going to fill in that end of the stadium,” McClain said. “I think it’s a lot more fun and it has created some buzz as you see that steel come out of the ground.”

Fans will be able to see more in the upcoming weeks. By the home opener McClain expects crews will have the frame of the building in place.

“I am hopeful; obviously there are a lot of factors there,” McClain said. “As they continue to move from west to east, hopefully by the home opener people will really get to see it fill in that space and get feel of the impact it’s going to have on the stadium.”

Weather was an obstacle during the early months of summer, but due to nicer weather the construction crew has been able to catch up.

“I think any of these projects has a set number of days built in that they know they are going to lose to weather,” McClain said. “The fact that we have had really good weather lately has been really good. As we move into the fall with the nature of the season we will have less and less of that  (poor weather). We feel like we will be able to make up a lot of ground in the fall.”

At the start of the school year and football season there will be some changes due to construction, but most of them will be behind the scenes.

“We were trying to minimize the impact that it has on our fans,” McClain said. “We want their experience to be positive. We want them to besides looking that way and seeing the building not really feel the implications.

“Our challenge really is kind of behind the scenes; getting people on and off the field, teams, bands and things that have to take place in a game. Our access is limited because of the construction. We are going to have some challenges there behind the scenes, but our hope is our fans don’t really feel the brunt of that.”