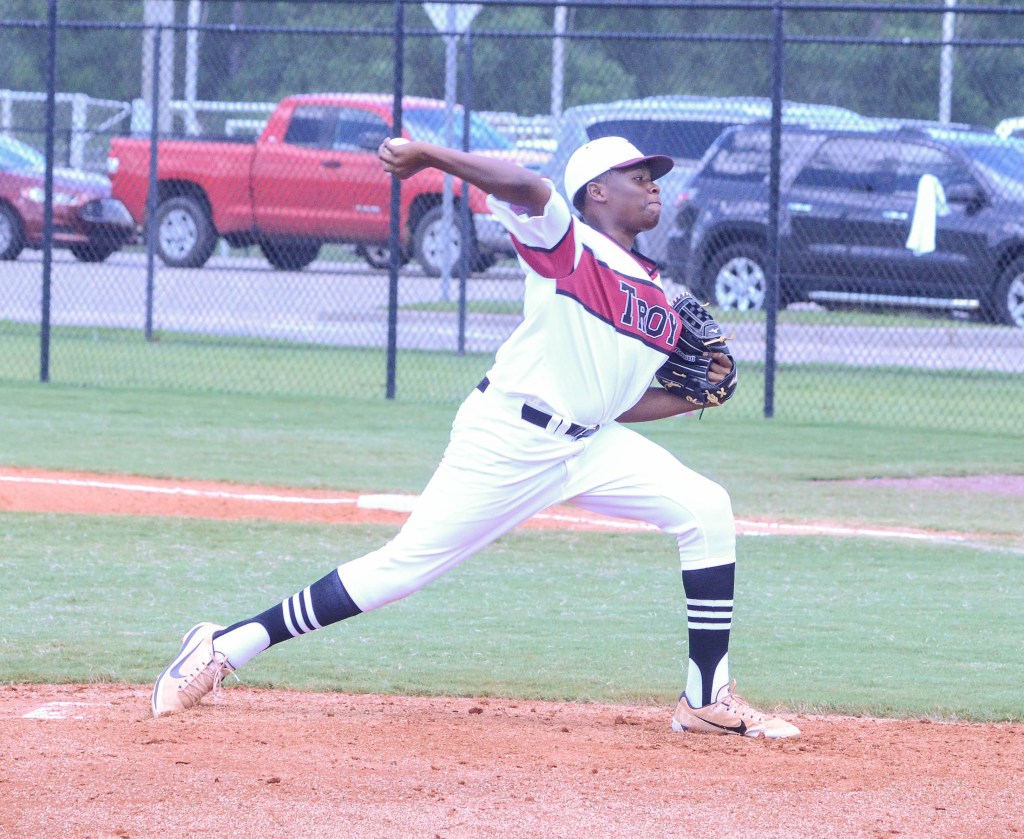 Photo/mike hensley Adrian Cardwell delivers a pitch for Troy in the State championship game last month. Cardwell and Troy will travel and play in the Junior Dixie Boys World Series beginning on Saturday.

“They are excited and emotions are high,” Huner said. “There are still some nerves, but the guys are looking forward to it. This is our last practice today (Wednesday); we are going to take Thursday off and travel on Friday. We have put the work in; now we are ready to get on the field.”

Troy has just one tournament under their belt this summer. At the state tournament in Dothan last month, the Trojans overcame a slow start on their way to a dominating championship performance against Opelika.

“They got better every game,” Huner said. “I knew without playing any practice games prior that it would take some time for the bats to come around. Luckily we played really good defense and pitching got better as well. Our momentum grew everyday. Baseball is a game of momentum, and I think we will pick up where we left off.”

This Troy team is no stranger to World Series play. A total of nine players have played in either a state tournament or a World Series.

“The experience is great,” Huner said. “They know the scenario, the week of practice that is required, and they understand the competition gets better every game.”

Troy scored 13 runs in the their championship win. Troy has outscored their opponents 52-22 over the course of the tournament. In Bluffton, the competition level will go up, but Huner believes his players could turn that into a positive.

“It may be easier to hit in a world series because the pitching is better and they are going to get more strikes,” Huner said. “They are not really worried about bailing out and dodging a pitch. You see good breaking balls, but they know they will be around the strike zone and that probably helps them mentally prepare.”

All season long, these players have played on a traditional baseball field. When they begin play on Saturday, they will be on an all dirt infield for the first time.

“When we won state we played on an all grass infield,” Huner said. “We found out that the next day that we would be playing the World Series on dirt. There are some changes. On a grass infield you hardly get a bad hop, ball is faster on dirt. The boys have to be ready on every pitch. We have been out here practicing for two weeks and I think they have adjusted well.”

Troy will begin the tournament on Saturday at noon central time when they take on Sumter (South Carolina).

“We are the visitors in game one so we get to bat first,” Huner said. “Goal one is to score first. It might not be in the first inning, but it may be the second or third. Score first and keep the advantage in our favor. Win game one and get ready for game two.”