Trojans deep and talented at the running back position 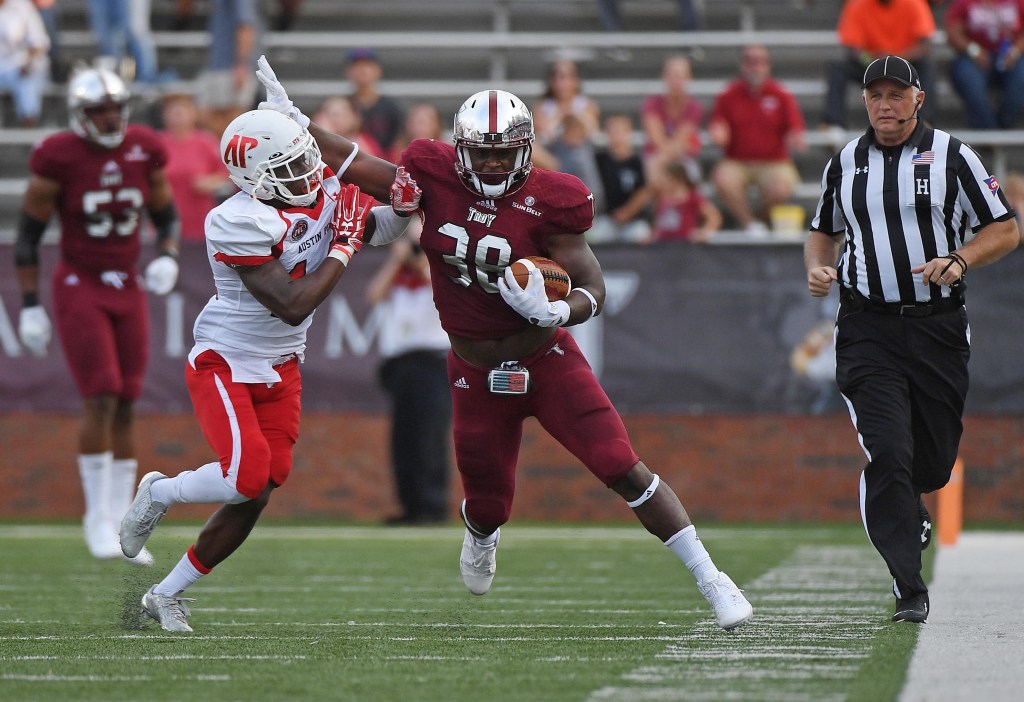 Messenger Photo/thoma graning Jordan Chunn stiff arms a defender during a game last season. Chunn makes up a deep backfield heading into the 2017 season for the Trojans.

The Troy Trojans enter the 2017 season with perhaps the deepest set of running backs within the Sun Belt Conference; now they just have to get healthy.

During day three of fall camp on Tuesday morning only Henderson and Anderson were full participants, while Chunn, Smith and Daughtry-Frye were limited.

“We have seven guys in camp that are playing running back,” said head coach Neal Brown. “ We are being careful with Chunn; making sure we are not going to overwork him. B.J. is coming off a slight knee injury in the spring. He is fine. We are just not tackling him to the ground. Jabir is recovering and running full speed.”

Even with three of their top runners limited during practice, Anderson and Henderson so far has picked up the slack over the first three days of practice.

“Jamarius has came in and has listened up and he is doing pretty good,” Chunn said. “Josh is a veteran out there so he is helping the younger guys. We have two younger guys DK (Billingsley) and Jamal (Hourel) who came in at fall camp and those guys have been ears wide open.”

Although injured, the three limited Trojans have still been heavily involved with practice.

“Me, Frye and B.J. are on the sideline coaching up,” Chunn said. “When they are in the younger guys are watching them. If the young guys are off the field I am coaching them up.”

When not on the field, Chunn is watching and soaking up as much information as possible.

When full healthy, Chunn believes the Trojan back field will be as strong as anybody.

“This unit could obviously be one of the best on the offensive side, but we can only go if the offensive line is working together,” Chunn said. “We are in their ears the same as they are in our ears.”

The Trojans held day three of fall camp on Tuesday in what was a relatively cool morning just outside of Veterans Memorial Stadium.

“Day three, the first day in pads,” Brown said. “Some really good things showing up and there are some things we need to work on. I think overall the day was not good enough for a veteran football team to come out on the first day of pads. The positives were we didn’t have very many guys on the ground. We were more physical than we were our first day in pads during the spring. The negatives were I just didn’t think we had a sense of urgency.”

Brown believes the defensive backs had their best day of practice so far during camp. The offensive line, according to Brown had a much better day of practice.

The Trojans will be back at practice on Wednesday at 9:10 a.m.