Back to work: Silvers and Trojans hit the field for fall camp 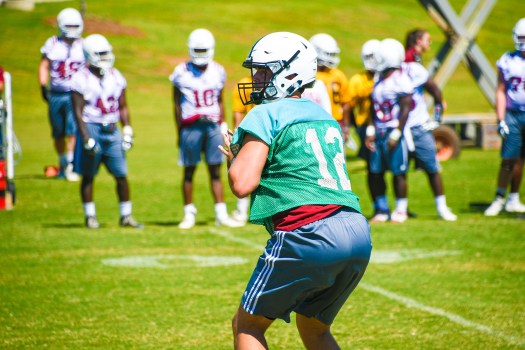 submitted Photo After missing all of spring practice, Troy quarterback Brandon Silvers has hit the practice field for fall camp for the Trojans. Troy will be back on the field to continue camp on Tuesday beginning at 9:10 a.m. 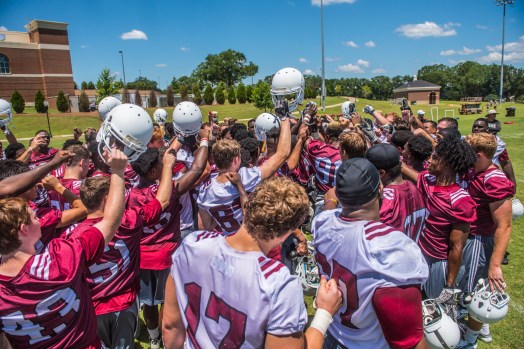 Messenger photo/Jonah enfinger After spending the first two practices in just a helmet, the Troy Trojans will put on the shoulder pads for the first time on Tuesday morning. 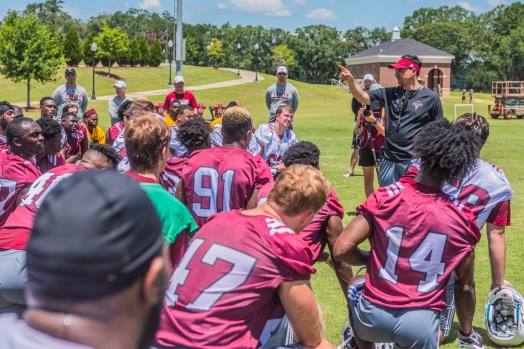 Messenger photo/Jonah enfinger After spending the first two practices in just a helmet, the Troy Trojans will put on the shoulder pads for the first time on Tuesday morning.

After missing spring practice with a hand injury, quarterback Brandon Silvers was anxious to get back on the field on Sunday evening when the Troy Trojans opened fall camp.

“It feels great,” Silvers said. “It’s great to be out there and being with my teammates again. I was far away from them this spring, not being round them and doing my own thing. I was working hard over there with my sled, but being back at practice has been fun so far.”

Silvers spent much of the summer watching his teammates run the plays. Six months later he is back taking snaps at quarterback.

“It’s been about six months since I have had an actual practice,” Silvers said. “(I’ve done) a lot of watching the last few months, but it has been great to get back out here.”

This is Silvers’ fifth Troy camp.

“Just having more fun knowing this is the last go around,” Silvers said. “I am having a lot more fun with the guys. I only have five or six more months with these guys; I’m working hard with them and getting better.”

The Trojans are returning 12 starters off last year’s 10-win season. On the offense, Troy is returning all of the running backs and most of the receivers.

“This is the best skilled group we have had since I have been here,” Silvers said. “We are very talented at each and every skill group. It’s a team game and getting the ball to all the playmakers is my job.”

The Trojans have been in helmets during the first two days of practice and add helmets and shoulder pads today. Coach Neal Brown likes the intensity from his players.

“Day two in the books and as you would expect the guys have had really good energy,” Brown said Monday. “That’s two days in a row. We have good leadership, which is something you should expect from a veteran team.  Two days in helmets only as NCAA requires. We will find out a little more when we get in shells tomorrow (Tuesday) and start practicing real football, but I like where we are at.”

The Trojans have remained healthy and Brown credits that to how the practices have been run.

“We have not been on the ground very much at all,” Brown said. “We look better. We look like an upper-level Division-I football team. Knock on wood, we haven’t had any injuries in helmets, which is the first time that has happened in my three years.”