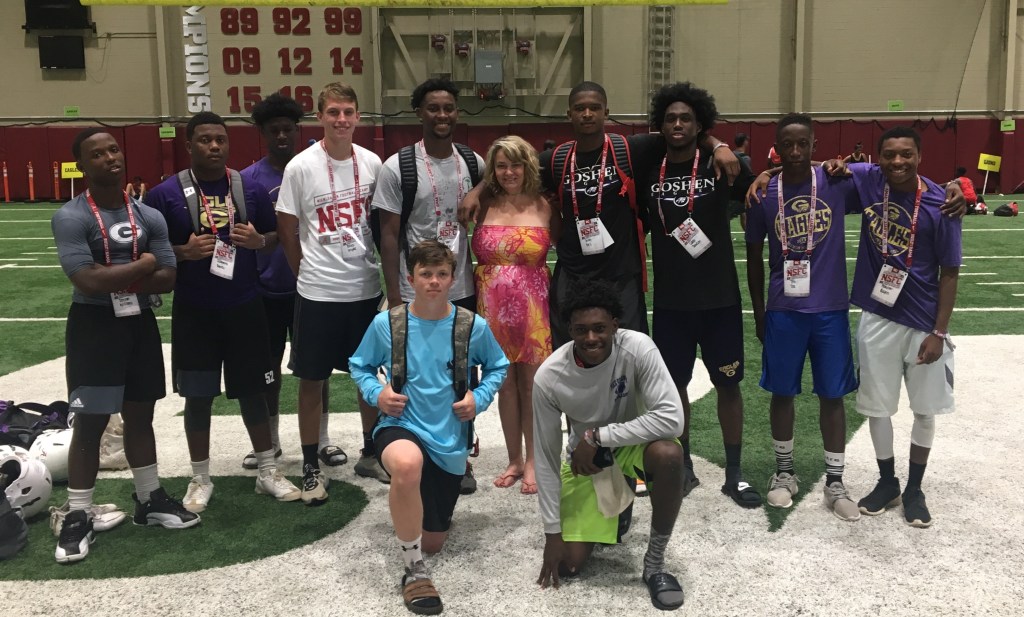 Submitted Photo Barbara Allison helped 12 kids get to the Nick Saban Football Camp in honor of her son Noah Allison who died in auto accident in 2012.

When Barbara Allison’s son Noah passed away in a car accident in 2012, she immediately began to think of a way to keep her son’s memory alive.

Five years later, she is providing an opportunity for young student athletes to fulfill their dreams of playing collegiate football.

Allison took 10 players from Goshen last week along with Pike County’s Jaidyn Wilson and Escambia Academy’s Patrick Wilson and paid their way into the Nick Saban Football Camp in Tuscaloosa.

“I started it after the year he died in 2013,” Allison said. “For two years, I was so depressed and down so I didn’t do the scholarship. In 2016, I sent Brent Flavors from Escambia and it made me feel so good just to do it and see the smile on his face.”

Days after she got back from the camp, Allison got back to work and immediately began raising money for this year.

“I raised a good bit of money in front of Food World and Piggly Wiggly,” Allison said. “I had a yard sale and I had my aunt and uncle donate money.”

Allison began her search for deserving students in Montgomery County public schools, but became discouraged when she didn’t get a reply.

“Nobody sent me anything and I was horrified,” Allison said.

Even though she was discouraged, she did not give up. She narrowed her search to Pike County and immediately received interest by members of Pike County and Goshen High School.

“I talked to coaches and principals,” Allison said. “I talked to the principal at Pike County and he said he knew exactly who was right for the job. I had mothers calling me back.”

The biggest interest came from Goshen and head football coach Bart Snyder. Goshen wanted to nominate 10 players to the camp. Not wanting to disappoint, Allison agreed to take all 10.

“It was something special that gave our kids an opportunity,” said Goshen head coach Bart Snyder. “It was a great experience for our kids to be able to participate in a camp of that level.”

Allison paid the way for each camper to attend the camp in Tuscaloosa. Also this year Allison offered towels with the phrase Fly High 69 in honor of son, certificates that stated they were selected to go to the camp and two shirts, one of which had a very special logo.

“It had a medallion of Captain America because that is what Noah was known as,” Allison said. “He was known as a super hero, especially at his last school. People really looked up to him. On homecoming, they had super hero day in honor of Noah and people wore their favorite super hero shirt.”

Three kids from her group had success at the Camp in Tuscaloosa. Pike County’s Wilson won the Award for Excellence as did Wilson from Escambia Academy. Goshen’s Iyan Hinkle left Tuscaloosa with a scholarship offer from Arkansas Tech.

“I am thrilled,” Allison said. “I am overwhelmed with happiness and delight that something that is positive can come out of my son’s death.

Allison hopes the most important thing her kids got out of the camp is that they know there is somebody out there that cares.

“Right before they left I checked on each one of them to make sure they were safe,” Allison said. “I took pictures of them and they know that I care about them. They know they are important to me and I think that is important.”