Troy looking ahead not behind 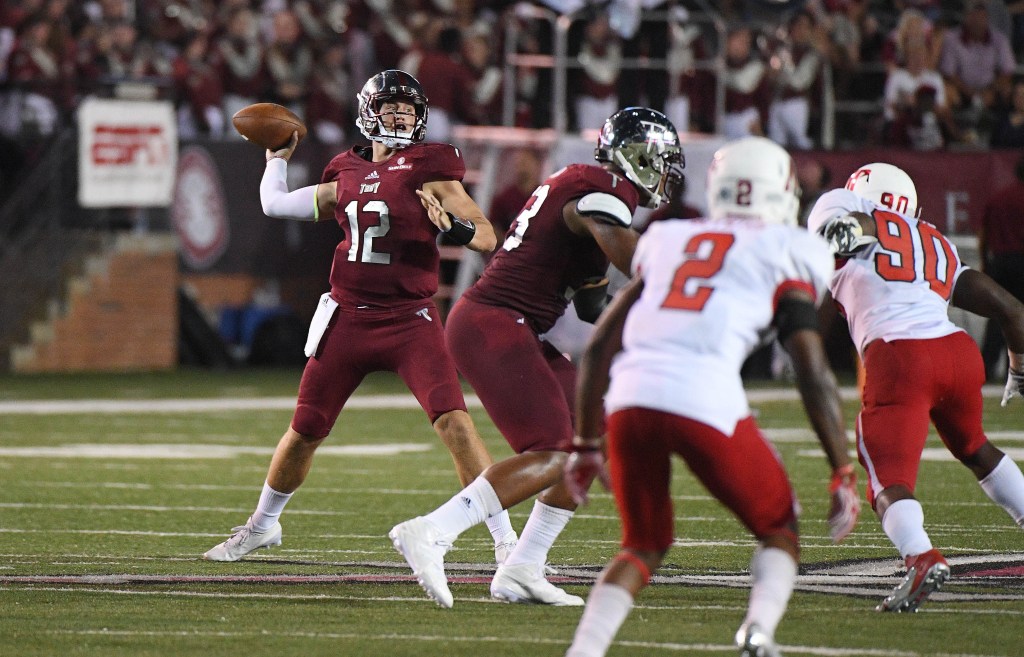 Messenger Photo/Thomas graning Silvers was one of nine Trojans to be named to the Preseason All-Sun Belt Team heading into the 2017 season. The Trojans will open up camp on Sunday morning.

After all the success and program-firsts a season ago, Troy head football coach Neal Brown is focused on the one thing they didn’t accomplish in the 2016 season.

With just 38 days until Troy’s opener against Boise State fans are still buzzing about last season’s success that included their first 10-win season in Division-I history, a Dollar General Bowl championship, their first ranking in the Associated Press Top-25 ranking and the biggest turnaround season in the country following their 4-8 record in 2015.

Even with all of those accolades, Troy still came up short in the area that mattered most to them: a conference championship.

“It was a special season for Troy football,” Brown said to the assembled media at Sun Belt Conference Media Day. “Now we have to flip the switch and start focusing on 2017. All those accomplishments were great, but what we didn’t accomplish was winning a conference championship. Our guys, we start camp on Sunday, now have that singular focus.”

The expectations aren’t just high locally for this program; the coaches around the conference are also starting to take notice. Last week the conference announced that Troy was picked to finish second in the Sun Belt Conference Preseason Poll behind only Appalachian State.

“I think it’s a compliment for what we accomplished last year,” Brown said. “I don’t think it necessarily has anything to do with what we are going to start on Sunday. We want to contend for a conference championship; I think that should be an expectation at Troy. When you have expectations, you can undersell yourself or you can you meet them head on. That is the approach that we are going to take.”

The Trojans will have the benefit of having experience this season. In all, the Trojans return 12 starters from last season’s team and Brown is hoping to take the next step this season.

“Talent is more important than experience, but if you have experienced talent then you have a chance to be special,” Brown said. “We have a lot of experience coming back. As far as production, we have almost all of our offensive production back. With all that being said, we have tons of room for improvement.”

One key cog returning will be quarterback Brandon Silvers. The senior gunslinger was selected to the Preseason All-Conference first team heading into 2017. Last season, Silvers led the conference in touchdown passes with 23 and ranked fourth in the league with 244 yards per game.

“As he has matured, his in-game decision making has improved,” Brown said. “Physically he has the tools. The thing that probably separates him from other Division-I quarterbacks is probably his release. He gets the ball out extremely fast. For him to repeat as first team all-conference, he is going to have to raise his level of play.”

Silvers was one of nine Trojans overall to be selected as preseason all-conference members.

“I think it says that some guys had really good years last year,” Brown said. “We have some guys that are deserving. My hope is that, at the end of the year, we have that same or possibly more.”

The Trojans have one of the more formidable secondaries in the conference heading into 2017. They return their entire secondary including senior safety Kris Weatherspoon, who finished second on the team in tackles.

“We have all of our secondary returning,” Brown said. “Cedarius Rookard and Kris Weatherspoon started every game last year. They are two of the better safeties in our league. We didn’t defend the pass great last year. What we did last year that really set us apart was we got interceptions and created turnovers.”

The key for the Trojans this year will be to continue to get pressure on the quarterback.

“That is probably the biggest question mark on our football team, definitely on defense,” Brown said. “How are we going to go about it? Whether it’s schematically or whether its guys winning one-on-one battles up front: how are we going to get pressure on the quarterback?”

Troy will get an early test in week one when they travel to the blue turf to take on Boise State on September 2.

“That is the preeminent program in the Group of Five if you look over the course of the last five to 10 seasons,” Brown said. “We are fortunate enough to kick off the season against them in Boise. That is a huge carrot to dangle during preseason camp. If we are not ready to hit on all cylinders, we can get embarrassed in the season opener.”