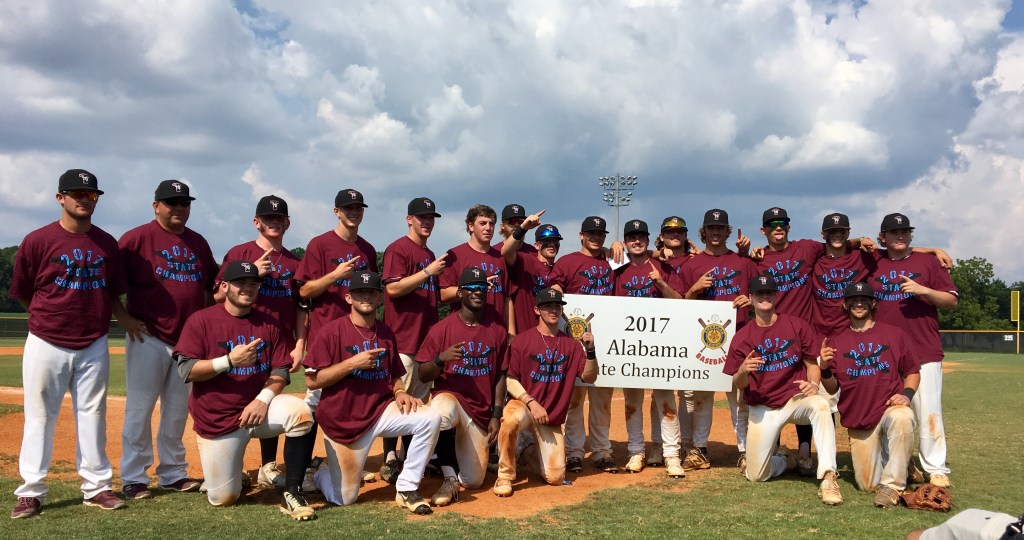 Troy Post 70 finished off their perfect run through the Alabama American Legion State Tournament with a 7-5 win over Tuscaloosa Post 34 to claim the 2017 championship.

Post 70 claims the state championship for the second year in a row and now will head to the regional tournament.

“It’s awesome,” said head coach Rush Hixon. “To set a goal like that and achieve it is awesome. It is something that we set out to do from day one and to be able to accomplish that is great.”

Troy’s pitching continued to be a big factor in the team’s success during the tournament. Post 70’s pitchers allowed two runs in the three games leading up to the championship.

“Overall I think this was the probably the best our pitchers have looked from top to bottom,” Hixon said. “We had some quality outings from the guys that we really count on.”

Parker Warren pitched Post 70 to a state championship last summer and Sunday he was on the mound to do it again. He pitched the first seven innings for Post 70 and allowed five runs on nine hits and four errors.

“With him going out there, we knew what we were going to get,” Hixon said. “He competed his tail off. He probably didn’t have his best stuff, but he was still able to win.”

Jackson Byrd picked up the two-inning save when he allowed just two hits.

The offense has also been a strength for Post 70 this tournament. They have averaged 12 points per game. On Sunday, Post 70 scored just enough to hold on to win.

“It’s comforting to see these guys finally starting to get hot and finding barrels,” Hixon said. “In the championship game we hit well. We had double digit hits in that game we just didn’t have the timeliest hits to score as many runs.”

Troy fell behind 2-0 early after Post 34 put up single runs in both the first and second innings.

Post 70 answered quickly however when they scored two runs of their own in the bottom of the second inning.

Jackson Murphy and Jones both reached base safely to begin the bottom of the second and both came around to score on a single to left by Tate.

After a scoreless third inning, Post 70 picked up their second two-run inning of the game in the fourth. Herring tripled in Jones and Tate drove in Herring on a ground out to give Post 70 a 4-2 lead heading into the fifth.

Post 70 scored a single run in both the fifth and sixth when Herring picked up his second triple of the game in fifth. Gandy gave Post 70 a run in the sixth when he singled to left to drive in Tate to increase Post 70’s lead to 6-2.

Post 70 picked up a big insurance run in their half of the seventh when Thompson his a single to left to drive in Herring to make the score 7-5.

It wasn’t easy for Byrd in the final two innings. He allowed four walks in the eight inning before allowing two hits and a walk in the ninth, but he came out of it unscathed and Post 70 held on to the win.

Post 70 picked up a win in last year’s regional tournament and with 12 players returning to Asheboro, North Carolina; Hixon is ready to see his team take the next step.

“It’s the same thing that we preach all summer; we have to play our brand of baseball,” Hixon said. “If we play to our ability we feel like we have a good chance to win against any team.

“The experience for them is going to be huge. I think three of the 12 are our top three pitchers and that is huge to have a year under their belt.”