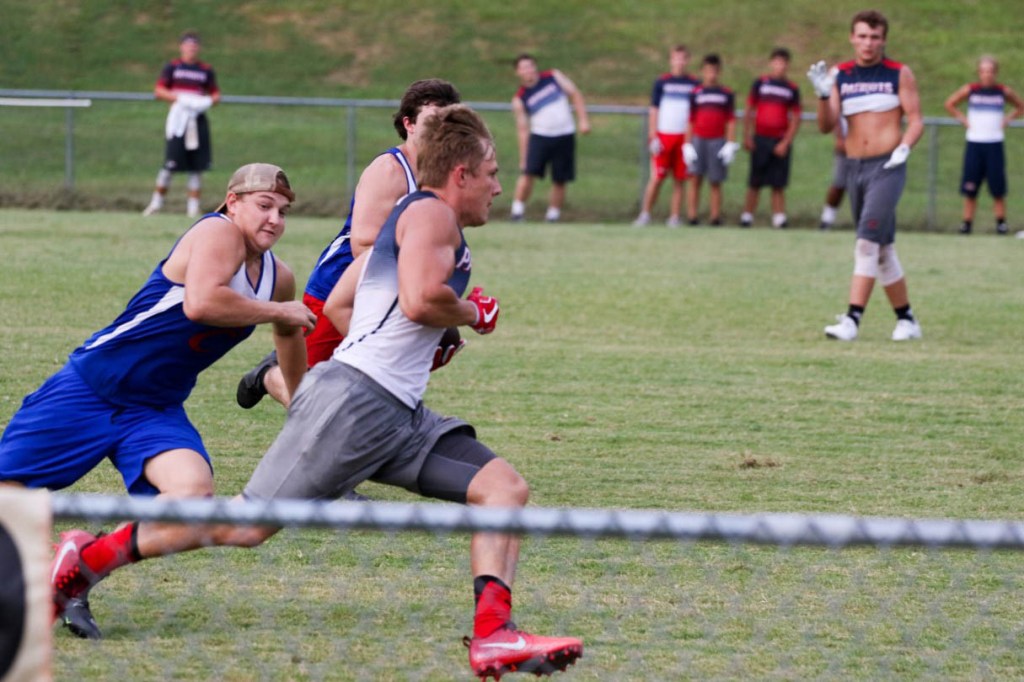 submitted Photo The Pike Patriots participated in a 7-on-7 tournament hosted by Lowndes Academy and took home the championship after defeating South Choctaw Academy 12-6.

The Pike Patriots claimed the championship in a 7-on-7 tournament hosted by Lowndes Academy.

The Patriots finished the tournament a perfect 6-0 and claimed the championship after defeating South Choctaw Academy 12-6.

“I was really pleased,” said Patriots head coach Gene Allen. “We went out there and played pretty well. We threw and caught the ball well and defensively we did a pretty good job. It was a lot of competition and a lot of running. You get a lot of conditioning in.”

The Patriots moved into tournament play and opened up with a 31-19 win over host Lowndes and advanced to the championship after getting past Macon East Academy 13-7.

Coming into the tournament, the Patriots haven’t done much on the field, but they have hit the field two days a week to get a little throwing in.

“We have been throwing every Tuesday and Thursday during the summer,” Allen said. “Our numbers aren’t great, so it’s hard to get a really good look, but it helps get everybody involved.”

The Patriots have long believed that 7-on-7 tournaments do not accurately judge the state of the football team, so instead of changing up their game plan to one that fits 7-on-7 play, Allen believes in keeping everything the same.

That defense stepped up and held their opponents to five points per game.

“It was good,” Allen said. “You’re not supposed to be able to play zone, but we played zone probably 75 percent of the time yesterday. We had a lot of success doing it and it was a big plus. If we can continue to do that once the season gets here we will be in pretty good shape.”

Patriots starting quarterback Reed Jinright had a good day leading his offense to a 6-0 record despite the hot and humid weather.

“He threw the ball well,” Allen said. “We scored a lot of points just about every game. Jade Sikes, Nathan Renfroe, Cody Hollis and Wood Jinright all caught the ball real well. Reed Johnson made some great catches out of the backfield.

“It got hot and everybody got tired as it went on. The ball started to get sweaty and wet, but we made some good catches when we had to.”

The Patriots are less than a month away from their season opener against Kingwood Christian and they begin practice next week.

“We are going to start working out in the afternoon and then go on the field and do some stuff in shorts just to get (adjusted) to it,” Allen said. “We have to get ready to go.”