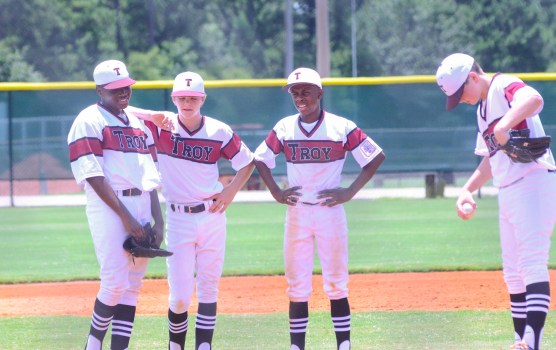 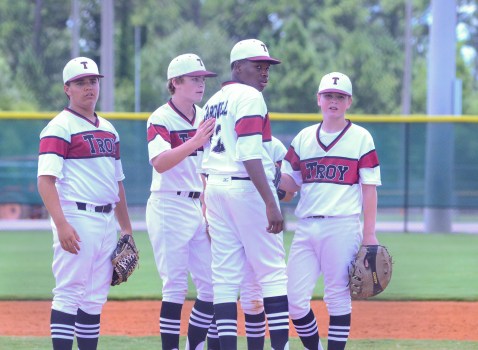 photo/Mike Hensley Troy players gather on the mound on Wednesday. 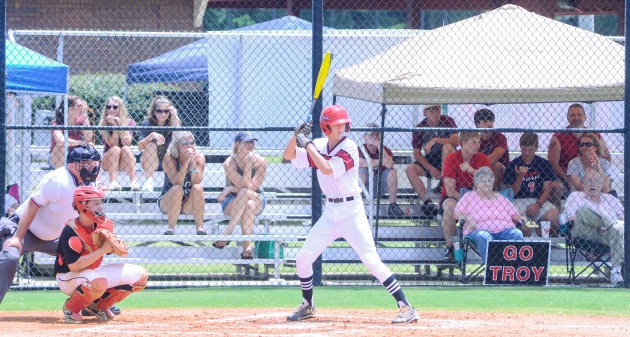 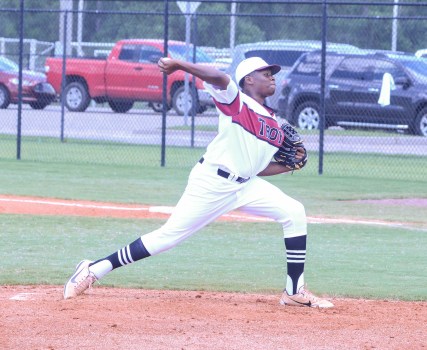 Photo/mike hensley Adrian Cardwell delivers a pitch for Troy in the State championship game last month. Cardwell and Troy will travel and play in the Junior Dixie Boys World Series beginning on Saturday.

On a hot blistering day, the Troy Junior Dixie Boys made Opelika feel the heat in a dominating 13-1 win on Wednesday to claim the junior Dixie Boys State Championship in Dothan.

The Junior Boys was Troy’s last team to see any action this summer and now they will represent the state of Alabama in the World Series in Bluffton, South Carolina.

“It was a quick turnaround from yesterday,” said manager Chris Huner. “The boys played better everyday. I reminded the competition got better every day and performed really well.

Troy scored in all four innings, putting the pressure on an Opelika team that had to play early Wednesday against Dothan.

“It was rough for them having to play back-to-back games,” Huner said. “Scoring in the first inning was big because it probably took the wind out of their sails. We kept our foot on the pedal and kept the pressure on them and it paid off.”

Cardwell got the start for Troy and pitched all but two outs of the game, going 3.1 innings. He allowed just one run on three hits. Jefcoat came and picked up the game’s final two outs and picked up a strikeout.

“He (Cardwell) started the first game for us and started for us today. He had the most rest,” Huner said. “He threw strikes, he got ground balls and pop ups. The heat break kind of forces you to change pitchers. Press Jefcoat was able to come in and continue to throw strikes and gave our defense some plays.”

Troy put the pressure on Opelika almost immediately when they scored two runs in the opening inning. After Jordan picked up a one-out double, Lee drove him in with a single to give Troy a 1-0 lead. Lee came around to score on an error of the bat of Skylar Kidd to make it 2-0.

“It was important to score early, because we didn’t want to wait until the end to score,” Jordan said.

Troy doubled their lead in the second when Lee came around to score on a Brady Huner single and Nate Braisted singled in Dalton Stephens to extend to bring the score to 4-0.

Opelika got on the board for the first and only time in the third inning. Troy answered with their biggest inning when they scored five runs to take a commanding 9-1 lead.

Jefcoat singled in Cardwell for the innings first run and Jordan followed up with a triple to score both Huner and Prestwood to make it 7-1.

Troy was gifted their last two runs in the inning. With Jordan at third and Lee at first, Lee took off before Opelika’s pitcher Tyler Birmingham began is motion home. Birmingham wheeled around and threw to an empty bag at second base. Jordan came home easily with Lee close behind him to bring the score to 9-1.

Try ended the game early after they four more runs in the fourth. Jefcoat began the scoring with a single driving in Kidd. Prestwood reached on error to score Jefcoat and Lee drove in both Huner and Stephens with a double.

Troy will now turn their attention to their trip to South Carolina for the World Series.

“We will take a few days off get back to practice maybe on Monday,” Huner said. “We have a few things to fine tune and we will keep at it. We would like to thank the Troy City Parks and Recreation Department, Dan Smith and David Dickey. Without the support of the City of Troy and Mayor Jason Reeves, Troy Recreation baseball would not excel at the level it is known for across the southeast.”