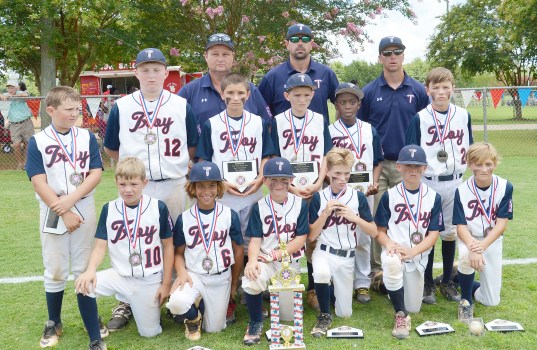 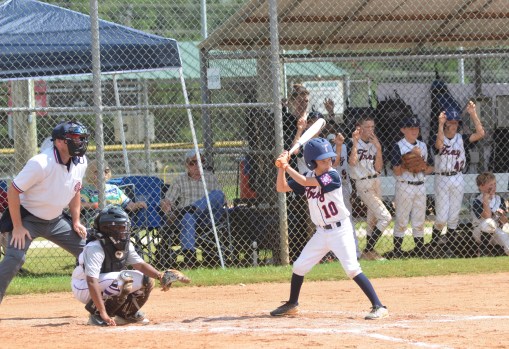 Dawson Bradford waits on a pitch in Tuesday's championship against Hueytown.

Troy’s quest for a state title came to a close Tuesday morning with a disappointing 11-4 loss to heavy-hitting Hueytown in the AAA Dixie Youth State Tournament championship game.

“I think we made a few too many mistakes today to overcome,” said manager Adam Brookins. “That’s the game of baseball. The ball doesn’t always bounce the way you want it to. There was a point in the game where every ball we hit was to their guys and every ball they hit was in the gap. You start making mistakes on top of that (and) it’s hard to win a baseball game.”

Hueytown dropped their first and only game of the tournament on Friday to Fairhope, but ever since they have been playing their best baseball.

“Through the tournament I think they started to play better,” Brookins said. “I don’t know if we played them at the wrong time, I don’t think we put together our best game today.”

Troy entered the game with limited pitching options and elected to go with Luke Barron as the starter. After pitching two innings, Jordan McBryde followed up and pitched two innings before giving way to Cole Pugh.

Hueytown drew first blood in the first when they sent eight batters to the plate and scored the game’s first three runs. Ethan Bucher singled in Gavin Franklin and Jeremiah Fuller had a two-run single scoring both Caleb Johnson and Bucher.

Both pitchers settled down over the next two innings. In the third Troy’s bats got hot. Wes Braisted connected on a homerun to deep right to get Troy on the board at 3-1. Pugh singled and came around to score on a wild pitch from second base.

With two runners still in scoring position, the game was halted. Hueytown coaches asked the umpires to inspect two of Troy’s bats to make sure they weren’t against regulations.

Umpires and Dixie Youth officials came together and decided the bats could be used. Once play resumed however, Hueytown’s new pitcher Baker Davis got Kade Brookins to fly out to the catcher to end Troy’s threat.

“When you see a team doing that you know that you have gotten to them,” Brookins said. “We have been hitting the ball well all tournament. You pay good money for good bats and that is a very good bat that we use. At the end of the day it doesn’t have anything to do with the bat, it’s whose hands it’s in.”

From then on it was all Hueytown. They added four runs in the fourth to take their second lead of the game at 7-3 when they sent nine more batters to the plate and had two hits, two walks and had two batters reach on errors.

Cade Edwards, who has been Troy’s power threat all tournament, connected on his fourth home run of the tournament in the fifth to bring Troy to within three at 7-4, but Hueytown answered in the fifth to put the game out of reach.

Hueytown scored four runs and took their biggest lead of the game at 11-4.

Even though Troy didn’t finish with a state championship on Tuesday, the future is bright.

“This is a very talented group of 10-year-olds,” Brookins said. “I think the best thing is there is a lot of baseball left in the years to come. When you get into these tournaments and you hear teams talking about you, you know you have a good team.”