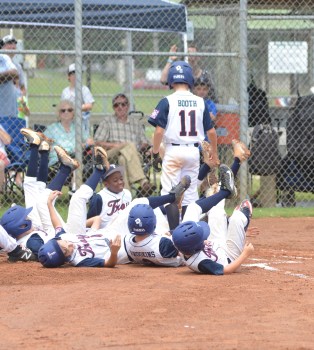 photo/Mike Hensley Wes Braisted at the plate for Troy on Monday afternoon at the Sportsplex. 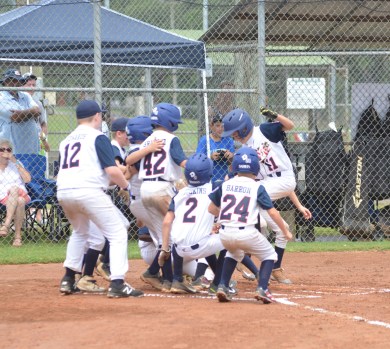 photo/Mike Hensley Jackson Booth jumps on home plate after a hitting a homerun on Monday afternoon.

Troy hit three home runs in their 12-6 win Monday over South Bibb in the Dixie Youth AAA State Tournament at the Troy Sportsplex.

The win keeps Troy alive this evening’s showdown with Fairhope. The winner advances to the championship tomorrow.

“Again they never give up,” said manager Adam Brookins. “I am proud with how they battled this entire tournament. I don’t know where we found those long balls, but we were knocking the lights out with the balls today.”

The power was a welcome sight for Brookins and Troy.

“It’s pretty special,” Brookins said. “I think we have had four kids hit the ball over now (in the tournament). In the past we haven’t had the kids that could ascend the baseball like we have this weekend, but what a good time to find it.”

Cole Pugh got the start for Troy and pitched two innings before being relived by Luke Barron, who as able to one out before giving way to Wes Braisted who pitched the rest of the way.

Troy finished the game with 10 hits led by Jackson Booth who picked up three.

Troy got on the board in the first inning when Booth hit the first of three Troy home runs, driving in Braisted and Pruitt Vaughn.

After a scoreless second inning, Troy extended their lead to 4-0 when Pugh singled in Bradford.

In the bottom of the third, it was South Bibb’s turn to hit the long ball. With Troy leading 4-2, Bodie Giddiens smacked a grand slam to give South Bibb their first lead at 6-4.

With all the momentum seating squarely on the South Bibb side, Troy had one of their most impactful innings of the tournament when they scored four runs to go back up 8-6. Kade Brookins hit a two-run homerun of the scoreboard in left and Cade Edwards followed up with a two-run home run of his own.

Troy put the game out of reach in the fifth when they got RBIs from Vaughn, Booth and Brookins to put Troy up for good at 12-6.