One more: Troy knocks off Fairhope, earns spot in championship 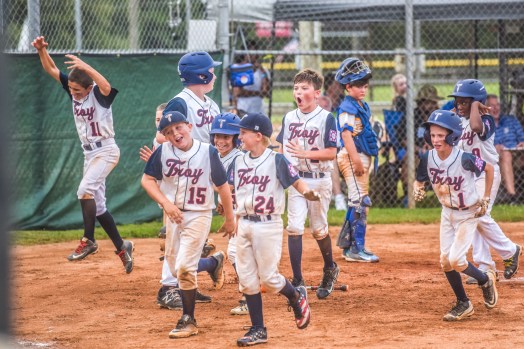 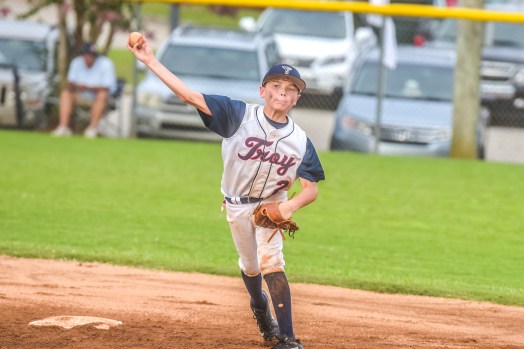 Troy got the last laugh against Fairhope Monday, defeating them 7-6 to earn a spot in the Dixie Youth AAA State Tournament Tuesday morning.

After losing to Fairhope Sunday evening, head coach Adam Brookins left the field believing he had the better team. They proved it on Monday.

“I was proud of them,” Brookins said. “They were a little shaky to start with, but as the game went on we didn’t make mistakes, and that is what kept us in the ball game.”

Cade Brookins got the start for Troy and lasted 2.1 innings before giving way to Jordan McBryde and Dawson Bradford.

“Great job by Jordan McBryde for coming in,” Brookins said. “I was proud of Kade (Brookins) for how he came in and pitched after last night and Dawson came in– made us a little nervous– but we wouldn’t have put him in if we didn’t have confidence in him.”

Troy had nine hits in the game by nine different batters, including a home run by Cade Edwards.

A wild start to the game cost Troy in the first when Brookins walked three batters and allowed Gavin Rehorn score the game’s first run on a wild pitch to give Fairhope the 1-0 lead.

Troy loaded the bases in the bottom of the first, but Luke Barron popped out to the pitcher to end the threat.

A scary moment happened in the second inning when Fairhope pitcher Rock Gearhart was struck in the head by a ball off the bat of Jordan McBryde. He was no longer able to pitch, but stayed in the game to hit. Troy got the big hit they needed that inning when they tied the game at one on a single by Dawson Bradford to score Tyler McLendon. McBryde stole home later in the inning to give Troy the 2-1 lead.

The game swung back in Fairhope’s favor in the third when they scored two runs to retake the lead at 3-2. Finlay Lavelle scored on a wild pitch and Braxton Taylor scored on a ground-out by Copeland Bryant.

The pendulum swung back in Troy’s direction again in the bottom of the third as they too picked up two runs to regain the lead.

Luke Barron popped up the ball down the left field line and found some grass in between the Fairhope leftfielder and third baseman. Jackson Booth and Brookins raced around third to give Troy a 4-3 lead.

After Fairhope evened the score at four in the top of the fourth, Cade Edwards hit his second home run of the day to lead off the bottom of the fourth.

“He is a game-changer,” Brookins said. “One swing of the bat can change a game and it is really demoralizing for the other team.”

Troy added another run later in the inning when Cole Pugh was hit by a pitch with the bases loaded to extend Troy’s lead to 6-4 heading into the fifth.

Fairhope kept coming in the fifth and again tied the score at six on a two-RBI single by Braxton Taylor.

Troy had a chance to put Fairhope away for good in the bottom of the fifth when Edwards walked with the bases loaded to score Booth, giving Troy the one-run lead.

Dawson Bradford entered the game in the sixth inning. In all, he walked three batters, but came out of it with no damage done, securing the win for Troy.

Earlier in the day, Troy defeated South Bibb for the second time in the tournament 12-6 to set up Troy’s rematch with Fairhope.

Edwards, Booth and Braisted all hit home runs in the contest for Troy, accounting for seven of their 12 runs.

“It’s pretty special,” Brookins said. “I think we have had four kids hit the ball over now (in the tournament). In the past we haven’t had the kids that could ascend the baseball like we have this weekend, but what a good time to find it.”

Cole Pugh got the start for Troy and pitched two innings before being relived by Luke Barron, who as able to one out before giving way to Wes Braisted who pitched the rest of the way.

Troy finished the game with 10 hits led by Jackson Booth who picked up three.

Troy will take on an unfamiliar opponent in Hueytown on Tuesday morning, but with the amount of confidence his team is playing with, Brookins believes his team is ready for anyone.

“I really don’t know much about them,” Brookins said. “I think they have some pretty good athletes in the outfield and we have been hitting the ball out there so that is something we need to be on the lookout for. The way these are playing right now, I would play the Atlanta Braves.”

First pitch is scheduled for 10 a.m. at the Sportsplex.