Troy falls to Fairhope in the battle of the unbeaten 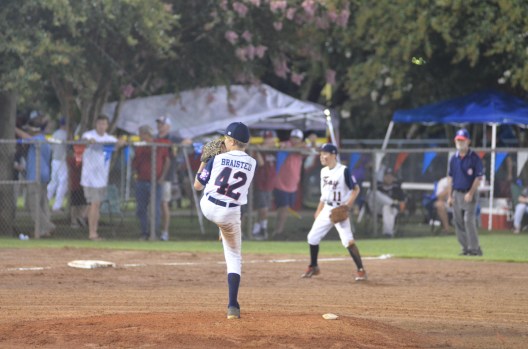 Wes Braisted delivers a pitch for Troy in Sunday night's game against Fairhope. 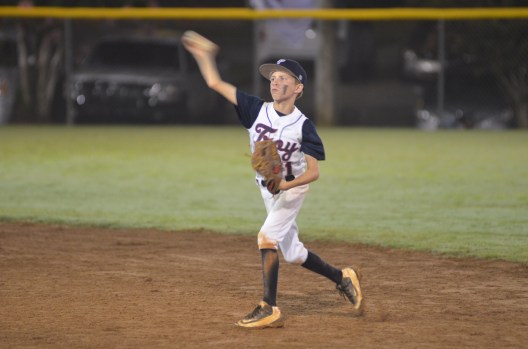 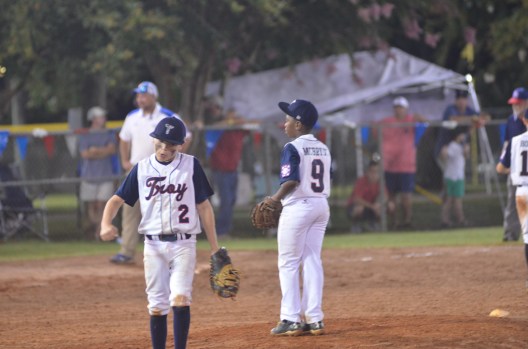 Kade Brookins walks back to first base after meeting with Jordan McBryde.

Fairhope won the battle of the unbeaten when they defeated Troy 11-10 in the Dixie Youth AAA State Tournament on Sunday evening.

After winning the first two games in walk-off fashion, Troy had the favor returned to them when Fairhope had a bases loaded walk in the sixth inning to pick up the win.

The loss sends Troy into the loser’s bracket where they will play South Bibb at 10 a.m. Monday morning.

“We dug ourselves in a whole early and made some uncharacteristic mistakes,” said manager Adam Brookins. “I am walking off this field truly believing the best team didn’t win today.”

Troy took the early lead in the first inning when Wes Braisted scored on a Jackson Booth double. Later in the inning, Troy doubled their lead to 2-0 when Booth scored on a wild pitch.

Fairhope sent nine batters to the plate in the first and went up 4-2 heading into the second.

After a scoreless second inning, Troy battled back to retake the lead in the third when Braisted singled in KaNeil Lewis and Pruitt Vaughn doubled Russ Braisted to bring the score to 5-4.

Fairhope picked up three hits and paired with two Troy errors were able to once again take the lead when they scored five third inning runs to go up 9-5.

Jordan McBryde drove in Tyler McLendon on a groundout and Dawson Bradford singled in Cade Edwards and Troy cut their deficit down to two at 9-7 heading into the bottom of the fourth inning.

After Fairhope looked to get an insurance run in the bottom of the fourth inning to go up 10-7, Troy kept coming.

In the top of the fifth inning Braisted led off the inning with a walk and came around to score on a wild pitch. Luke Barron had the big hit in the inning when he smacked a double to drive in Kade Brookins to even the score at 10.

The game stayed deadlocked at 10 heading into the bottom of the sixth inning.

Brookins walked the bases loaded and with one out in the inning he walked Jerry McDonald bringing in the winning run.

“I did not burn a pitcher tonight,” Brookins said. “We will have everybody we need to pitch tomorrow. I still like where we are; our backs are against the wall with one loss. I have no doubt we will see them in the championship tomorrow.”