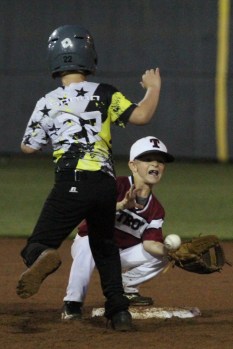 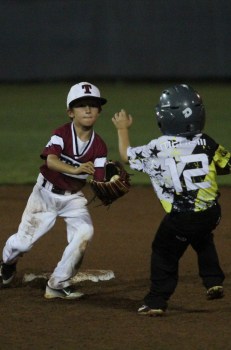 Photo/Dan Smith Both the Troy 6u coach pitch and Ozone Rookie teams began their state tournament on a high note with wins on Thursday night. The 6u team scored 16 runs and defeated Ashland 16-5, while the Rookies defeated Moulton 13-0.

The Troy 6U coach pitch team performed well on both sides of the ball on Thursday night in their 16-5 win over Ashford in the opening round of the state tournament in Dothan.

Ashford had scored four runs in the opening inning, but Troy’s defense locked down and only surrendered one run the rest of the game.

The win gives the young team confidence as they move into the winner’s bracket.

“Confidence for 6-year-old kids is huge,” Ross said. “They saw a new field and a team they haven’t seen that we knew was probably a pretty good team. They responded and it puts us in a good position. We have seen some good teams down here, but if we play like we are capable, we have a chance of doing really well.”

Troy scored three runs in the first inning after sending half the lineup to the plate. Troy tacked on seven in the second and three runs in both the third and fourth innings.

“We hit the ball pretty decent – not as well as we can, but I thought we ran the bases exceptionally well,” Ross said.

AJ Gutierrez picked up a big hit for Troy, one that Ross said was his best of the tournament season. Cope Russell also had a big hit.

On the defensive side, Troy picked up two double plays when Dru Jinright caught a line drive at third base before throwing back to first to complete the double play. Ethan Gardiner also a caught a ball in the outfield and threw out the runner at second base.

“You can tell that was a huge momentum change,” Ross said. “You could see it on their coaches’ faces, when we threw that runner out at second and tagged him it was like they lost any hope or momentum.”

The Troy Ozone Rookies also had a big night on Thursday after defeating Moulton 13-0 in four innings in the opening round of their state tournament in Tuscaloosa.

Davis Kilcrease led Troy at the plate after finishing the game 3-3.

The Rookies will be back in action on Friday when they take on Macon County at 6:30 p.m. today in Tuscaloosa.