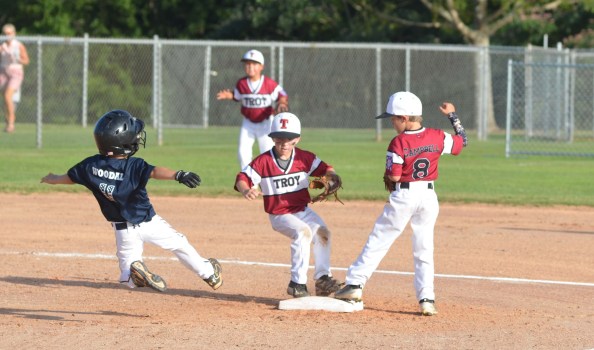 Photo/ After defeating Enterprise in the District Tournament final in Troy, the 6u Coach Pitch team is ready to represent Troy at the State Tournament in Dothan beginning this evening. 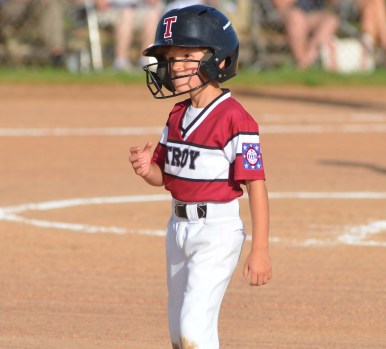 Despite the soaring temperatures, the Troy 6U coach pitch team is ready to represent the city in the State Tournament in Dothan later this evening.

It took until the final game of the district tournament, but after defeating Enterprise in two must-win games, Troy moves on to state.

“I think we are ready,” said manager Scott Ross. “We have had some fun at practice the last few days. We played a scrimmage against Luverne the other night and we have hit the ball really well the last few practices and in that game. I think we are primed and ready to go.”

The state tournament will be the first time that these players have played on a stage of this scale. During the process, the goal for the Troy pitching staff is not letting the moment get to big for their players.

“This is the biggest stage they have played on,” Ross said. “We have tried to do some different things to make it fun for them. When they won that tournament a lot of their confidence improved.

“We try focus on it being just a baseball game and not make it too big for them. We don’t want them to be nervous. We want them to understand the stage that they are on. It’s a big stage and a lot of people are going to be watching.”

Like most teams, Troy has faced their fair share of weather over the last couple of months. From rain to soaring temperatures, Troy has seen it all.

“It’s good because you get to see the field in different scenarios,” Ross said. “We have been able to adjust to the heat. The biggest thing is giving them a few extra breaks and stay hydrated.”

Even though they had a lot of success inside their own ballpark during the district tournament, Ross and his players know they are up against a set of teams with a lot of talent.

“I really don’t know what to expect,” Ross said. “There are 17 teams down there. Eufaula, Luverne and the Enterprise team that we beat in the championship will all be there, so we have faced some of these teams already. I expect there will be some really good teams, but I truly expect us to compete.”

Troy will begin what they hope is the journey to the state championship this evening when they take on Ashford beginning at 7:30.