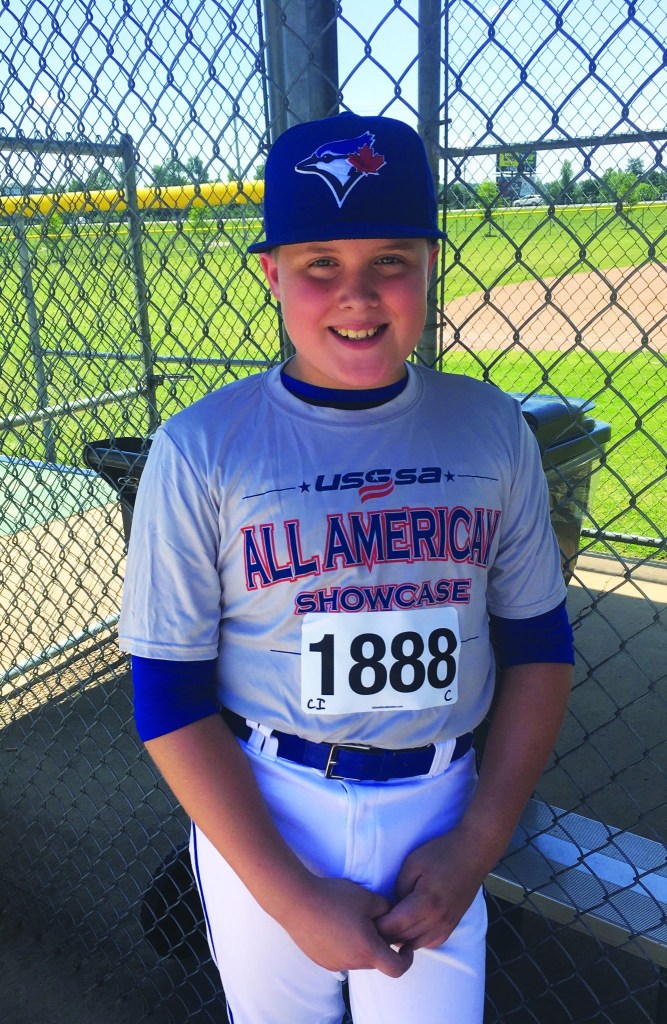 submitted Photo Tyler Martin has been named to the All-American Southeast Region Roster after participating in a showcase event in Jonesboro Arkansas.

11-year old Tyler Martin of Troy has been selected to the 2017 USSSA All-American Southeast Region Roster and will play in the All-American Games held at the ESPN Wide World of Sports Complex in Orlando.

Tyler was one of hundreds of players from throughout the southeast to travel to Jonesboro, Arkansas for a showcase event and team tryouts on May 31. After weeks of waiting, Martin had his named called during a live-streamed selection show.

“It’s exciting,” Martin said. “It was a lot of fun to be able to represent the southeast. I get to meet new people; I just like it.”

Martin recently wrapped up his season after playing for a travel-ball team out of Madison, Mississippi.

Martin has wanted the opportunity to try out for a team like this for over a year, and in May he and his dad (Dr. Tyler Martin) chose Jonesboro as the place they wanted to go.

“I was really excited to get to do it,” Martin said. “We have been practicing for about a year and it has been fun. After all the practice, we finally get to do it.”

Martin had the opportunity to choose between trying out as a pitcher, a middle infielder, a corner infielder and a catcher or as an outfielder. Each player could choose to tryout for two of those and, in the end, Martin decided to give it a shot as a corner infielder and as a catcher. As a corner infielder, Martin took five groundballs and had to make the throw to first base. The scouts judged him on his accuracy and fielding and they also used a radar gun to see how hard he threw the baseball. As a catcher, Martin was graded on how well he blocked pitches from behind the plate, as well as making throws to second base.

Each player was graded by scouts on the five tools of baseball and they used the same 20/80 scale that they use in Major League Baseball.

“I think I did pretty good,” Martin said. “I practiced a lot leading up to the tryout.”

Even though Martin felt like he had a good showing at the tryouts, he was extremely excited to see and hear his name.

“We were all excited,” Martin said. “It was really exciting to see my name pop up on the screen.”

Both Tyler and his father were excited, but in the end it was Tyler who was more excited than his father.

“I think we were both pretty excited,” Martin said. “I was excited, so it was probably me.”

Martin will now get set to head to Orlando to participate in the All-American Games as representative of the Southeast National League team.

“I think it’s going to be really fun,” Martin said. “I get to meet new people and go to Disney World. It’s fun to represent the Southeast.”