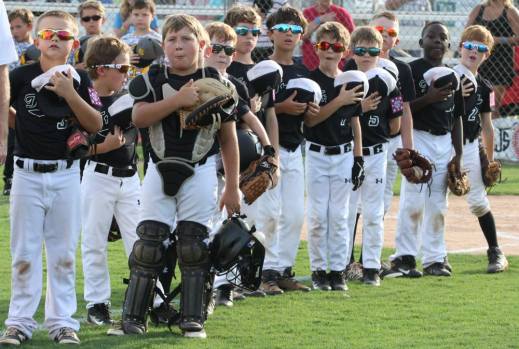 Photo/Dan smith The Troy 8u Coach Pitch team swept Geneva in Enterprise on Monday night to claim the district championship. Troy defeated Geneva 15-0 and 13-2 and will advance to the state tournament in Enterprise beginning on July 8.

The Troy 8U Coach Pitch team swept Geneva 15-0 and 13-2 on Monday in Enterprise to bring home the district championship.

Troy advances to the state tournament beginning July 8 in Enterprise.

Troy put up 10 runs in the opening inning, including two-run homerun by Kellen Stewart. Owen Pugh led all batters at the plate by going 3-3.

In game two, Troy batted around in the opening inning and scored eight runs on their way to an 11-run win.

“It’s a group of talented kids,” Pugh said. “You play baseball in Troy and you expect to win. A lot of them have siblings on older teams that have been competitive that have played on winning teams in the past. It’s just part of what you do when you play here.”

Troy’s 8U team was the only baseball team that traveled outside of Troy for the first round of sub-district play when they traveled to Andalusia. Pugh said his players enjoyed the travel and the opportunity to play on a different field.

“I think it’s good for them,” Pugh said. “The kids that age are excited about playing somewhere different and see a new ball field. These are 8-year-olds so a lot of them haven’t been on tournament teams. This is their first experience with post season ball.”

Troy outscored Geneva 28-2 in Enterprise and has outscored opponents 55-6 in the past four games. After playing with a pitching machine during the regular season, Troy had to adjust to coach pitch at the start of tournament play.

“We are getting a lot better,” Pugh said. “It’s a little different playing with a coach pitching. Coach Tommy Stewart is doing a really good job throwing the ball hard enough to where the boys get something on it when they hit it. We have some pretty good athletes and we have taken a lot of BP to get ready for coach pitch.”

Not only has it been a transition for the players, but Stewart has had to face the pressure of pitching to his hitters.

“It all goes through the guy pitching the ball,” Pugh said. “He has a big responsibility to throw strikes and get the ball in the best position he can for different size kids. It’s a much bigger transition for him than it is for the other coaches.”

Not to be overshadowed by the offense, the defense has also stepped up.

“I think our defense is what is giving us the chance to be really competitive,” Pugh said. “We are very athletic in the infield and then we have been able to put some kids in the outfield that can move and they are transitioning really well to catching the ball in a different spot.”

Troy has less than two weeks until the start of the state tournament in Enterprise and they will spend a lot of that time getting back to the fundamentals of baseball.

“(We’ll focus on) just baseball awareness, like what to do with people on base,” Pugh said. “We want to be sound in running the bases.”