Moving on: Troy Sweetees battle back from opening round loss and win district tournament 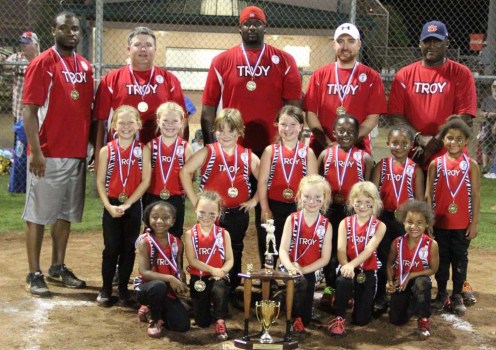 submitted Photo The Troy Sweetees defeated both Enterprise and Taylor-Rehobeth on Monday evening to claim the district championship. They advance to the state tournament in Eufaula beginning on July 8. 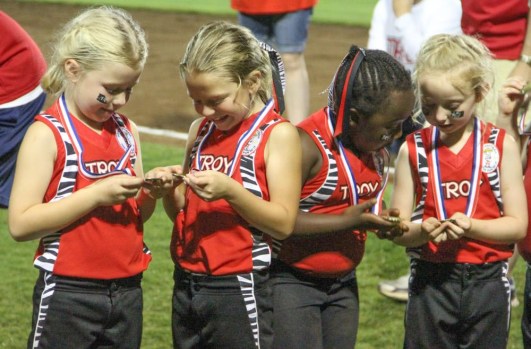 The Troy Sweetees battled back from a round one defeat to win the district championship with an 18-17 win over Taylor Rehobeth on Tuesday.

With the win, Troy earns a spot in the state tournament in Eufaula beginning on July 8.

“I am very happy for the girls,” said manager Willie Wright. “You could see the excitement and the enjoyment on their face because they were able to say they won their first championship. To accomplish that through adversity and to see to a group of girls come together and compete is a good feeling.”

It wasn’t an easy road for the Sweetees. They dropped their first round game to Taylor Rehobeth and were forced to win out to have the opportunity to play for the championship.

Troy entered their final at-bat trailing by three runs. It was a similar to the situation they were in during the opening round.

“The score was 10-9 (in opening round game). We were the home team and we didn’t score a run,” Wright said. “This time I pulled them in and I said, ‘Girls we need to score four runs and you guys win your first championship.’ They orchestrated it. They ran the bases and put the ball in play. They did the little things well enough to succeed.”

Troy jumped out as the visiting team against Enterprise in game one on Monday. They scored seven runs in the opening inning.

“That puts a lot pressure on an opposing team,” Wright said.

Troy used that early cushion to secure an 18-9 win over Enterprise. In game two it was the opposite. Taylor Rehobeth led throughout the ball game.

“You could hear people say that we were tired,” Wright said. “I told them it’s not an excuse. We can compete and I’m not going to tell them that we are tired. What they did at the end was made plays on defense, we hit the ball and we ran the bases well.”

Troy will have a couple weeks to rest up for their run at a state championship. After a little break, Wright and his players will get back to work.

“I gave them off until Monday,” Wright said. “We are going to hit the ground running on Monday by doing the little things like running the bases and touching first base, understanding that if you do the little things right then you have a good chance of winning.”