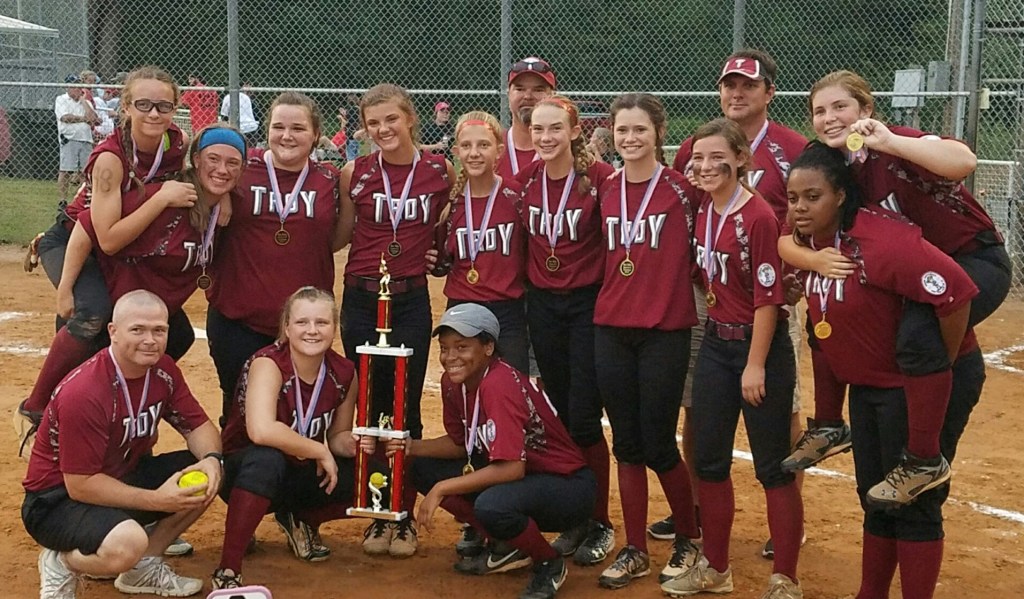 Submitted Photo The Troy Belles defeated Greenville 26-7 to claim the district championship on Monday night. The Belles advance to the state tournament in Montgomery.

The Troy Belles wrapped up the district championship with a dominating 26-7 win over Luverne on Monday.

The win wrapped up a spot for the Belles in next month’s state tournament.

“It’s great because I think we had three practices,” said head coach Brian McLendon. “The way these girls have gelled has been amazing to watch. They took each other in as family and played together as a family.”

Lexi McLendon took the ball as Troy’s starter on Monday and pitched the opening two innings before Morgan Bundy finished off the third and final inning.

“Both pitched good,” McLendon said. “Lexi struggled a little bit in the third and gave up some runs. Morgan came in and shut them down and finished the game off.

At the plate, Madison Campbell led the way on Monday by hitting a two homeruns including a grand slam to end the game. Teammate Whittaka Lowery also had a homerun.

“They hit,” McLendon said. “Everybody on the team had a hit. It was a great night of hitting the ball. Long shots and good line drives.”

The Belles will hit the road to Montgomery for the state tournament.

The Troy Ponytails earned a spot in this evening’s district championship after defeating Greenville 13-0 to advance out of the loser’s bracket.

Hannah Sparrow got the start for Troy and lasted all four innings without surrendering a hit and striking out six batters.

The Troy Darlings stayed alive on Monday by defeating Luverne 14-3 in Luverne. Troy will be back in action in the district championship game this evening beginning at 6 p.m.

“It was a total team effort,” said head coach Anthony Dixon. “The young ladies played really good defense and the entire line up hit the ball one through12. Now we have to come back and do it again tomorrow.”