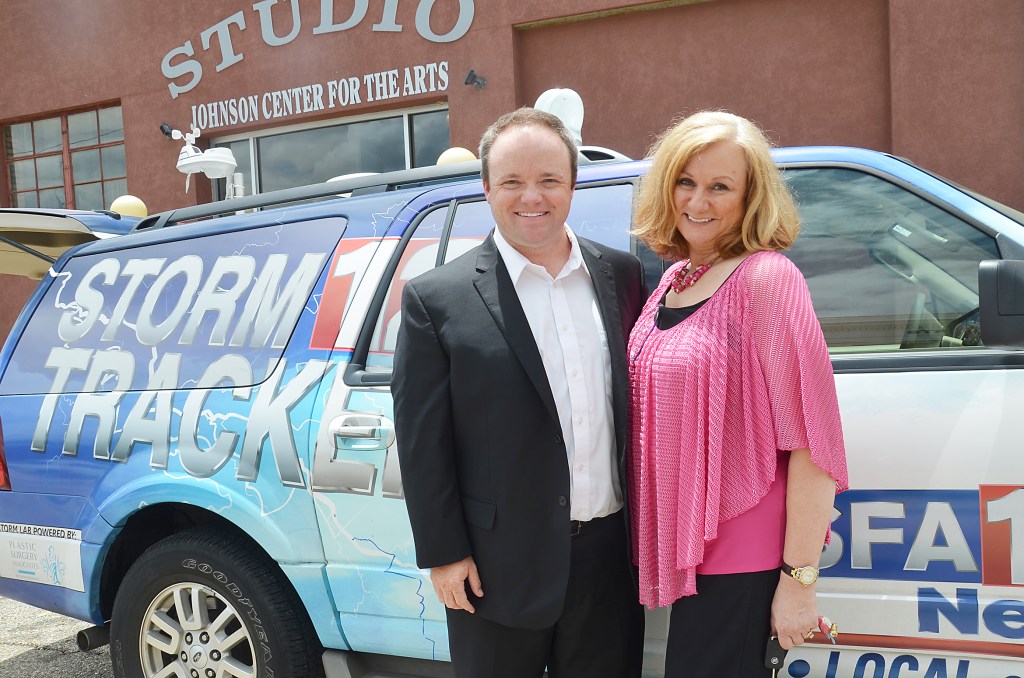 Josh Johnson, WSFA chief meteorologist, was the guest speaker at Female Factor on Wednesday. He travels on the Stormtracker, which makes it possible for him to report from the scene rather than in the studio. He is pictured with Dottie Black, a member of the Female Factor Advisory Board.

Will Rogers said that, if you don’t like the weather in Oklahoma, wait a minute and it’ll change.

But, in tornado weather, one’s chances are better of seeing a twister coming in Oklahoma than in Alabama.

Josh Johnson, WSFA chief meteorologist, was the guest speaker at the Wednesday meeting of the Female Factor at The Studio in downtown Troy. He shared valuable information about the weather with the women in attendance and it was well received, said Diana Lee, a member of the Female Factor Advisory Committee.

“Josh shared information about weather that I did not know,” Lee said. “He said that, per capita, Alabama has more tornado deaths than the other states. One reason is that we have a lot of tornadoes and we also have a lot of trees. In Oklahoma, you can see for miles so you can see a tornado coming. But, here in Alabama where we have so many trees, it’s often not possible to see a tornado until it’s there.”

Johnson said this has been a wild year for tornadoes within a 50 miles radius of Montgomery.

“The number of tornadoes is up and I guess that’s just the luck of the draw,” he said. “In this area, we have always had a large number of tornadoes. However, it used to be if a tornado touched down in the woods in Wilcox County, nobody knew about it.  Today, we know when and where tornadoes touch down.

“Technology has changed the way we predict and detect the weather. We’re better at it and people are more aware of what is going on with the weather. Also, the population has increased so we have more people to be affected by the weather.”

Johnson said this section of Alabama has had a lot of rain and some flooding. Hurricane season is coming so the weather is usually a popular topic of conversation.

“I’ve experienced hurricanes, ice storms, snow, blizzards but when lightning hits, it’s too late,” he said. “We should respect the weather because it’s something that we can predict but not control.”

For that reason, Johnson said visiting the schools is especially important to him.

Lee said she was impressed with Johnson’s commitment to teach young people about the weather and how it works.
“Josh said he visits about 125 schools a year in an effort to make students aware of the weather’s warning signs and to respect the weather in order to stay safe,” she said. “He made us all aware of the importance of being alert to weather conditions and the importance of being respectful of it at the same time.”