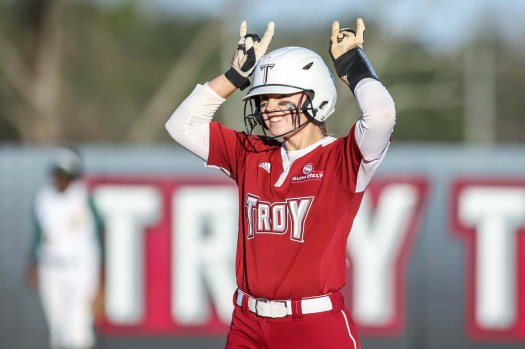 After four stellar years with the Troy Trojans, Becca Hartley said goodbye to the game and team that she loves.

A graduate of Charles Henderson High School, Hartley quickly became a hometown hero with her highly successful career at Troy.

“I don’t think it has quite sunk in yet,” Hartley said. “I am overwhelmed with my experience in four years and the relationships that I have built. I couldn’t be more thankful.”

Hartley finished her career as one of the program’s top offensive weapons. Hartley finished third all time in Troy history with 39 homeruns, including 16 in her senior season, good enough to rank 16th nationally.

She finished fourth in RBIs with 122 and ninth in runs scored with 134.

“I had a lot of success in high school, but the college game is completely different,” Hartley said. “During my freshman year it was a shock to see the talent that I was facing. Over the course of my career, I think it was the experience that helped me the most. I was hoping by my senior year it would click and it did.”

In a recent letter to the fans and the university, Hartley compared softball to life. She went on to explain that she is better off because of her experience playing the game.

One of the things that Hartley will remember the most when she thinks back at her time with the Trojans will be the relationships she had with her teammates and coaches.

“I attribute my success on the field to my teammates and coaches,” Hartley said. “They pushed me everyday. I thank them for that for molding me into the player that I am today.”

Not many student athletes can say they were able to stay home and play collegiately in their own backyard. That was an opportunity and a privilege that Hartley will never forget.

“I got to be there with my parents. They were at every game,” Hartley said.  “I was able to give back to the community. I know I just played softball, but I played for them because they have given me so much from elementary and throughout high school. I owe it all to them.”

Those relationships stick out in Hartley’s mind as something she will remember, but on the field one memory sticks out above the rest.

“It was probably the Florida State game during my sophomore year,” Hartley said. “We went down there and took a game from there. They were ranked 10 at the time and that was pretty big for us.”

Hartley will still have a strong presence at the university. She has started her master’s in accounting and she is also a graduate assistant in compliance in the field house.