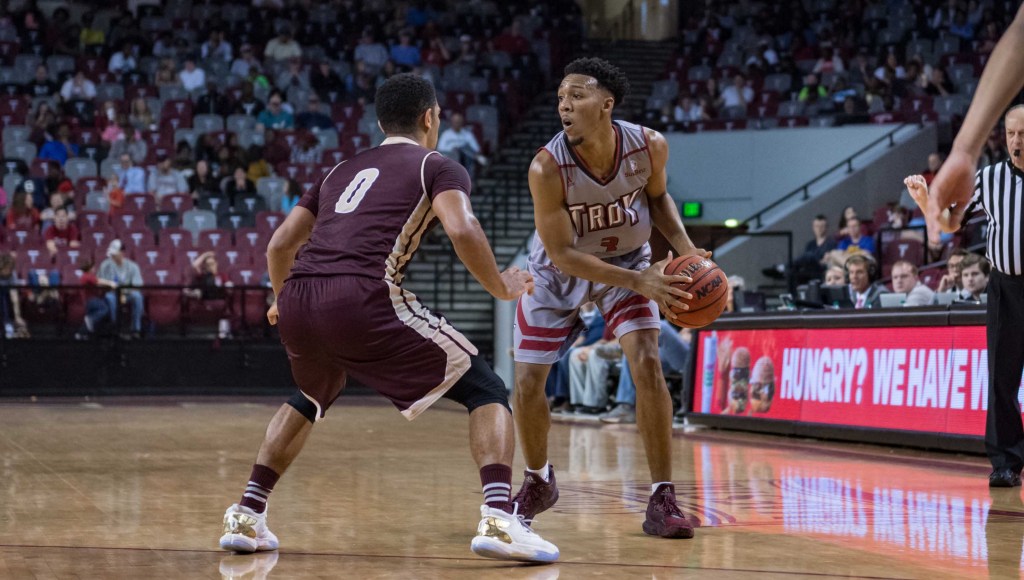 submitted Photo After a successful 2016-2017 basketball season, the Trojans look to carry over their momentum into next season and continue to grow as a program. They will have the opportunity to make noise nationally when they take on Kentucky in November.

The Troy men’s basketball team is the latest program to cash in on the university’s rise in popularity.

On Tuesday afternoon, it was announced that the Trojans will take on Kentucky in the Adolph Rupp Classic in November.

The Trojans finished last season with their first appearance in the NCAA Tournament since 2003 after they won their first ever Sun Belt Conference Tournament championship.

After taking one of the nation’s “Blue blood” programs in Duke in the opening round of the tournament, coach Phil Cunningham’s squad now has the opportunity to take on another one in perennial power Kentucky.

“One of the things we wanted to do with our schedule is upgrade,” Cunningham said. “We are ready to take on the Blue Bloods of college basketball. We were close on Duke, but it didn’t work out. This Kentucky thing was brewing for about a month and it really fit our schedule well.”

The Trojans will take part in the multi-team event along with the University of Illinois-Chicago, Kentucky, Fort Wayne State and East-Indiana State.

“It’s a really good situation for us because we get two road games and two home games out of it,” Cunningham said.

The Trojans have had their sights on upgrading their non-conference schedule, but had to wait until the roster got a little stronger.

“We couldn’t do it immediately when we got here because our roster wasn’t ready for it,” Cunningham said. “I still don’t know if our roster is ready, but it’s at a point to where we are definitely ready to upgrade the schedule.”

The basketball program is the latest team to gain headway over the last year. The University also had the women’s basketball team advance to their second straight NCAA Tournament and the football team finished their season with a win in the Dollar General Bowl, giving them their first ever 10-win season in their Division-I history.

“We came off an athletic year where it’s hard at our level to do what we have done,” Cunningham said. “When you talk about the success of so many different teams and all the national recognition that came with the success. I think everybody has the sense where whatever we had to do to capitalize we don’t need to wait or hesitate.”

That sense of urgency paved the way for the Trojans making it official with the Wildcats.

“This is the time, lets seize the day and lets all take the next step forward after coming off such a great season,” Cunningham said.

Cunningham, along with other University coaches have made two stops in this year’s Trojan Tour and so far the fans of Trojan Nation have been appreciative.

“They are just relaying the joy they had from experiencing the NCAA Tournament,” Cunningham said. “The conversations at the end of the day are always lets do it again.”

Although the fan base is still excited about last season, The Trojans have put that in the past and are ready to improve next season, even though it is still months away.

“From a coaches and player’s perspective we have already moved on,” Cunningham said. “Our challenge is how we can we put ourselves in the best position to do this again.”