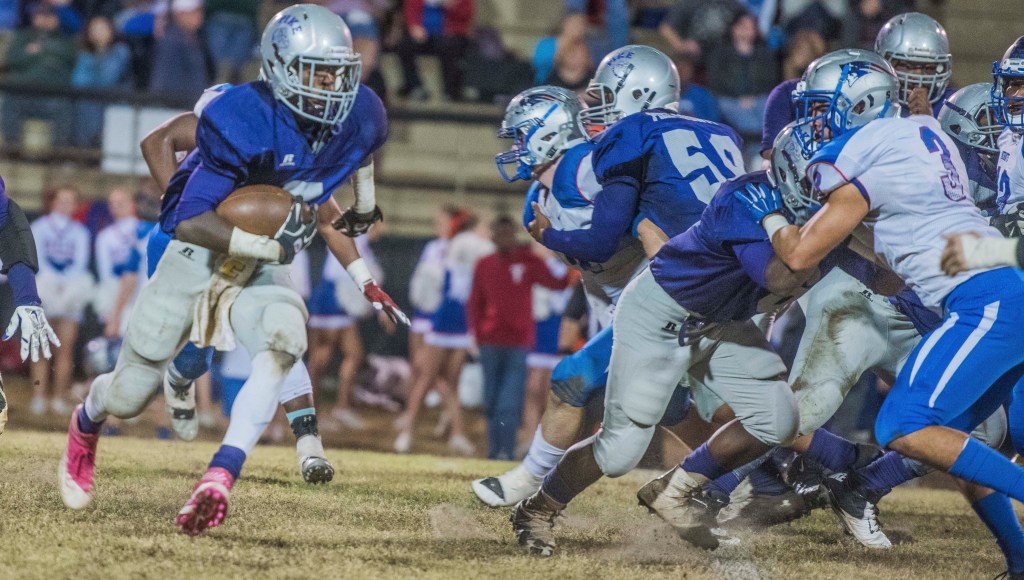 Messenger Photo/Jonah enfinger The Pike County Bulldogs hit the road to take on Bayside Academy in the second round of the Class 3A State Playoffs.

The Pike County Bulldogs academic year was filled with both team and individual success.

The Bulldog football team swept region play on their way to another postseason berth, while one their own was named runner up for the Tip Colley Scholarship.

In the fall, the Bulldogs were anxious to make another deep run in the playoffs. After losing Deshaun Cowling, Jerrell Lawson and others due to graduation, the Bulldogs’ roster consisted of many young and inexperienced players.

When the season began, the Bulldogs had an early test against one of the top-ranked teams in the state in the Elba Tigers. The Bulldogs came out of the gates slow and fell to the Tigers 36-22

From there, the Bulldogs rattled off eight wins in a row, finishing their region undefeated at 6-0 and outscoring their opponents 308-82 in the process.

The Bulldogs closed out the regular season with a non-region loss to G.W. Long 23-21.

“We had a slow journey,” said Bulldogs head coach Fred Holland. “Our guys worked very hard over the summer and the effort that guys put in really showed during the season.”

The Bulldogs matched up with American Christian in the opening round of the Class 3A state playoffs. The Bulldogs were able to hold on to defeat American 27-22 to advance to round two where the Admirals of Bayside were waiting.

The tenth-ranked Bulldogs fell behind quickly 17-0 in the opening half. The Bulldogs didn’t’ get their first completion until the third quarter and didn’t get on the board until the fourth. Their season came to an end with a 24-7 loss.

Like the football team, the boys of the hard court entered the 2016-2017 with plenty of turnover.

The Bulldogs advanced to the Class 3A Final Four at the end of the 2015-2016 season on the backs of Cowling and Lawson. With those players gone, it was up to Juhmir Lampley and Uri Rouse to pick up the slack.

Under head coach Doug Holland, the Bulldogs finished up the regular season with a 17-6 record as they headed into area play.

After finishing the area tournament in second place after falling to Daleville, the Bulldogs hit the road to continue postseason play. In the Class 3A Sub-Regionals the Bulldogs got 22 points out of Lampley in a 61-53 win over Geneva. The win sent the Bulldogs to the regional semifinal against Hillcrest-Evergreen.

“I am just proud of the team effort against a good Geneva team,” Holland said after the win. “I told them it’s all about advancing during this time of the year. Going back to regionals was one of our goals.”

The Bulldogs stayed close to Hillcrest-Evergreen, but the Jaguars were too much to handle in a 49-43 loss for the Bulldogs ending their season.

The Lady Bulldogs entered the basketball season with a very young team, one that consisted off seventh and eighth graders. At the end of the season, the Bulldogs finished the season with a 4-17 record. Even though the season came to a close with a 30-24 loss to Wicksburg in the opening round of the area tournament, head coach Todd Reynolds liked what he saw out of his team.

“I set the goal around eight wins,” Reynolds said. “We had 11 games this year that were decided by 10 or less points. That is more close games this year than they have had in the last 10 years combined. There were some good things that came out of it. It’s a process when you’re trying to change a mentality and a concept. It takes time and I was real proud of their effort.”

The boys’ baseball team was under new direction in 2017. Taylor Barnes came to Brundidge by way of Hoover High School. The boys finished the season with a 5-20 record after picking up wins against Zion Chapel and Abbeville.

Lady Bulldogs head coach Fawn Sims led a young bunch of players into the 2017 softball season with an eye on taking the next step as a program.

The Bulldogs finished the season in the area tournament, but Sims believes they are on the right track.

“We knew we were going to have our challenges before the season started,” Sims said. “Nothing was a huge surprise to us. In a lot of the games we lost this year, it was us beating ourselves. As the season went along we did some growing, but we have a lot of work to do.”