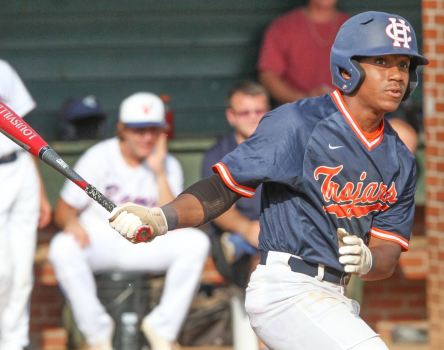 Photo/Dan Smith Charles Henderson senior Jabronski Williams will be a part of the 2017 graduation class this morning. Williams while at CHHS played baseball, football and basketball for the Trojans.

When Jabronksi Williams went through his graduation rehearsal Tuesday afternoon, he began to realize his long awaited dream of graduating becoming true.

Williams, a senior at Charles Henderson high school came to Troy after spending his freshman and sophomore years at Goshen. Later this morning, he will have the opportunity to graduate as a Trojan.

“It’s something that you have been waiting for since you are little,” Williams said. “I am excited and ready to graduate from high school and start my college life.”

While in high school things have been everything but slow for Williams. The senior played three sports in basketball, baseball and football.

All three of the sports helped shape Williams into the man he is.

“Football made me mature into more of a man,” Williams said. “All of my coaches, coach Tuck, coach McCoy and coach Shannon all helped me become the man I am today. It’s something I really love. I love playing three sports, it’s all fun.”

“I felt with me playing sports that I had to keep my grades up,” Williams said. “They kept me focused and determined to do good in school. I wanted to lead by example. The younger kids saw me and they want to do good as well. In order to get a scholarship you have to keep your grades up, so scholarships helped me stay focused.”

“It was something that I never thought would happen,” Williams said. “I know not a lot of kids get offers in two sports so I was very grateful to have two different paths that I could go down. I felt baseball was my calling and I could go far in it. Football was my first love, but I love both equally.”

On senior night Williams got to line up with his fellow seniors to be honored for their time at Charles Henderson. For Williams, it was a time to reflect on his time with the Trojans.

“We have bonded a lot as a team,” Williams said. “From the time I signed a scholarship, I had a lot of support from my brothers. I am going to play against them my freshman year so it’s going to be pretty cool.”

Williams started high school in Goshen and played baseball under head coach Robby Kinsaul. Williams saw playing time as a freshman and quickly excelled at the game of baseball.

“Coach Kinsaul put me out there as a freshman,” Williams said. “He believed in me when nobody else did when I was younger.”

When Williams decided to make Charles Henderson home, everybody made him feel welcomed.

“It was something different,” Williams said. “I had faith when I came here. I didn’t think I was going to play a sport. There was a lot of hype around Charles Henderson. The opportunity came and I took advantage of it.”

On the football field, Williams began on the defensive side of the ball, when head coach Brad McCoy saw just how athletic Williams was, he made the move to offense.

“He taught me a lot,” Williams said. “He is really special to me. We have always gotten along well.”

Williams will now get set to head to Selma and even though a lot will change, the hard work and determination will stay the same.

“I am going to be determined going to college,” Williams said. “There will be someone that is going to be bigger and faster than you. Everyman is for himself and I am going to have to go there and compete.”