Burbage makes an impact in only year with the Patriots 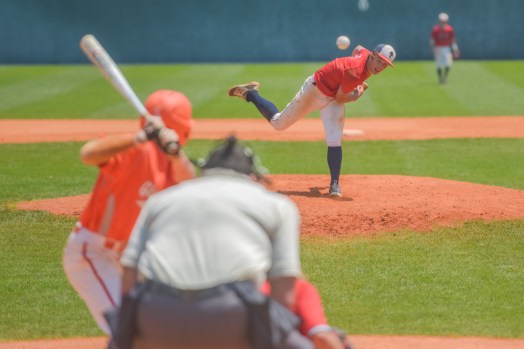 Messenger Photo/Jonah Enfinger In just one year with the Patriots Reece Burbage helped lead both the Pike football and baseball team into the post season. In baseball Hixon helped lead the Patriots to their first championship appearance since 2012. 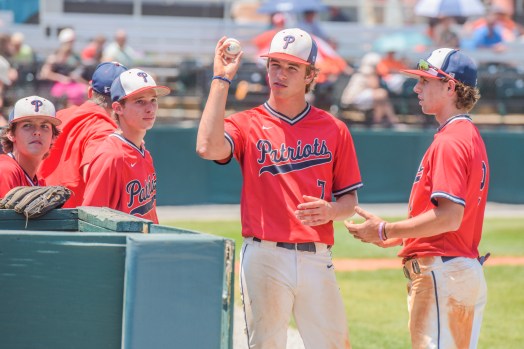 Messenger Photo/Jonah Enfinger In just one year with the Patriots Reece Burbage helped lead both the Pike football and baseball team into the post season. In baseball Hixon helped lead the Patriots to their first championship appearance since 2012.

Reece Burbage’s time at Pike Liberal Arts was short, but the impact he made both on the football and baseball field will long be remembered.

Burbage came to Troy from Holtville and after helping lead the football team to the post season, he was the staff ace for the Patriots on their way to an appearance in the state championship in his final year of high school baseball.

“I thought I had my top performance this year,” Burbage said. “This was my last year this year and coming in I didn’t have any colleges looking at me so I do what I do to get to the next level.”

Burbage came to Pike just before the start of the school year and quickly felt at home.

“It was easy,” Burbage said. “Everyone at Pike accepted me as part of their family. I was looking forward to moving and for me personally it was easy.”

So many of Burbage’s baseball teammates played football in the fall and he used that as an opportunity to get to know his teammates before the spring.

“During football we got to know each other and we were able to hang out,” Burbage said. “Throughout the school year it turned into a brotherhood and it felt like I had been there my whole life.”

In an age where so many players play multiple positions, Burbage is an old-fashioned pitcher. He sits atop the Patriot rotation waiting on his turn to pitch. He rarely stepped to the plate, but played a huge role on the mound.

The passion of being a pitcher has been there since he was a child and playing with his dad.

“Starting out as a little kid, my dad was my coach,” Burbage said. “As a pitcher you can see what you’re good at as you are coming up. Pitching was what I was best out, and I just went from there.”

Burbage’s dad helped stir the passion that he had for the game of baseball.

“He told me if you set your mind to it you can do whatever you want,” Burbage said. “The sky is the limit and everyone’s dream comes true if they work hard enough.”

Burbage’s father is not the only influence in his life. His grandparents did not miss a start in 2017.

“They helped raise me this year because I haven’t been home,” Burbage said. “There is a good support system that runs through the family.”

Now after entering the season without a college offer, Burbage is exploring welcome opportunities.

“I am pretty positive I will be going to AUM (Auburn University in Montgomery),” Burbage said. “It’s exiting because it’s everyone’s dream as a kid to play in college or in Major League Baseball.”

Burbage pitched just under 71 innings in 2017 and held his opponents’ batting average to .163, striking out 95 batters. Burbage liked to pitch backward to hitters by showing them his strong curveball, before finishing them off with his upper 80s fastball.

“Personally I like by curveball more because not everyone has a true 12-6 curveball in high school,” Burbage said. “Nobody sees it coming and I come back with my fastball after that.”

Burbage was clocked as high as 88 MPH in 2017 and he believes once he gets into a college program he will get stronger.

“Going into a college I will have a set workout,” Burbage said. “In high school playing three sports, it gets hard to focus on just one thing.”

Although it was brief, Burbage received tutelage this past season under former Alabama pitcher and Patriots head coach Allen Ponder.

“He is a great coach and he really knows what he is talking about,” Burbage said. “He is someone I could trust and rely on to help me get success. He fixed all the little tweaks that I had.”

Burbage and the Pike pitching staff as whole experienced great success up and down the rotation.

“I believed in every single one of them, “ Burbage said. “I believe that it didn’t have to be just two of us to win. We all trust each other to get the job done.”

The pitchers led the Patriots all the way to Montgomery for the state championship and although they come up short, it was a memory that Burbage won’t soon forget.

“It was a blast and it is something that I will never forget,” Burbage said. “Even though we lost, we finished where we wanted to be. It won’t always turn out the way you want, but I had more fun in my senior year that I could ask for.”

Burbage believes the Patriots have the pieces to make the trip to Montgomery a common occurrence.

“The juniors will have a strong class,” Burbage said. “There are only a few of them, but they will lead them. They should have a pretty successful year next year.”