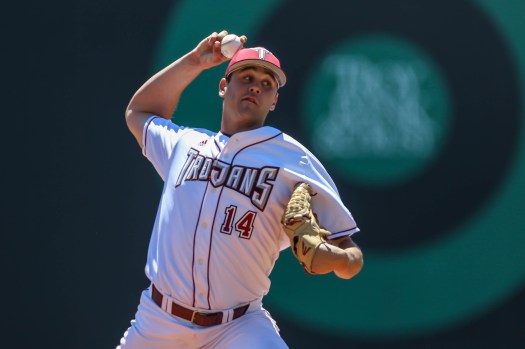 Photo/Troy Athletics Troy right hander Andrew Crane sits in the top 20 in ERA, walks and hits per inning and hits per inning. Despite having a scorless streak that currently sits at 36.2 innings, Crane has remained humbled and believes the streak says more about his teammates than it does about himself. 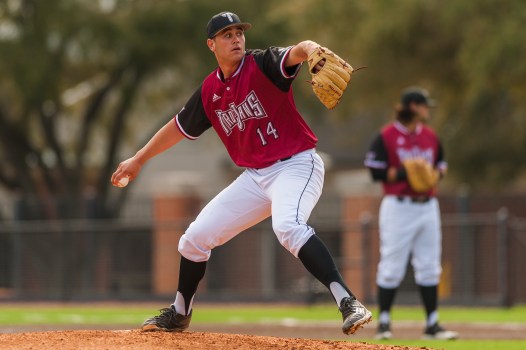 Photo/Troy Athletics Troy right hander Andrew Crane sits in the top 20 in ERA, walks and hits per inning and hits per inning. Despite having a scorless streak that currently sits at 36.2 innings, Crane has remained humbled and believes the streak says more about his teammates than it does about himself.

After a season-ending surgery in 2016, Troy red-shirt junior Andrew Crane had a record-breaking season in 2017 and is ranked among the nation’s top pitchers as the Trojans head into the season’s final series against South Alabama.

Coming tore his labrum in 2016, and started this season in the bullpen.

“Coming out of the bullpen was something I had to get used to again,” Crane said. “Whenever I get my name called I go out there and do what I do. I have always had that competiveness in me, so it wasn’t hard to come out of the bullpen.”

Crane came from Troy from East Mississippi College and before he could throw a pitch for the Trojans he went down with the injury.

“It was a process,” Crane said, adding he was “throwing twice a week and getting the feel of the mound again.”
“Overall I think it helped me, because it gave me year to watch and see what was going on so I can get a feel of how the games are played at this level. In that aspect I say it has helped, but getting back into the swing of things was tough.”

The waiting paid off for Crane. The red-shirt junior hasn’t allowed an opposing runner to cross home plate in 36.2 consecutive innings. The last time Crane allowed a run of any kind it came in his first start of the season against Texas-Arlington on March 31.

Even though he sits in the top 20 in a handful of pitching categories, Crane believes it’s more of a testament to how well his team has played behind him.

“I’m not going to sit here and say I don’t notice it, but to me it’s just pitching,” Crane said. “It’s not me getting the scoreless streak. I may be up there pitching, but there are seven guys behind me diving in holes and gaps. It’s not me throwing zeroes, it’s the whole team. I am the one on the mound getting the attention, but it should be the Troy Trojans are putting up zeroes, not Andrew Crane.”

Crane does have one more year of eligibility following this season and he has dedicated it to becoming more athletic on the mound.

“I feel like if I get more athletic that it will help with my velocity,” Crane said. “If that helps my velocity than it will help make my breaking balls and off speed pitches better. That is one thing I am going to work on this summer.”

The Trojans have one more series in Mobile before they begin play in the Sun Belt Conference Tournament and Crane believes Troy has the arms to contend.

“We can go a long way with our staff; we are really deep,” Crane said. “We have guys that can get the job done immediately. There isn’t a guy on our staff that I don’t think, when they step on the mound that they won’t get the job done.”