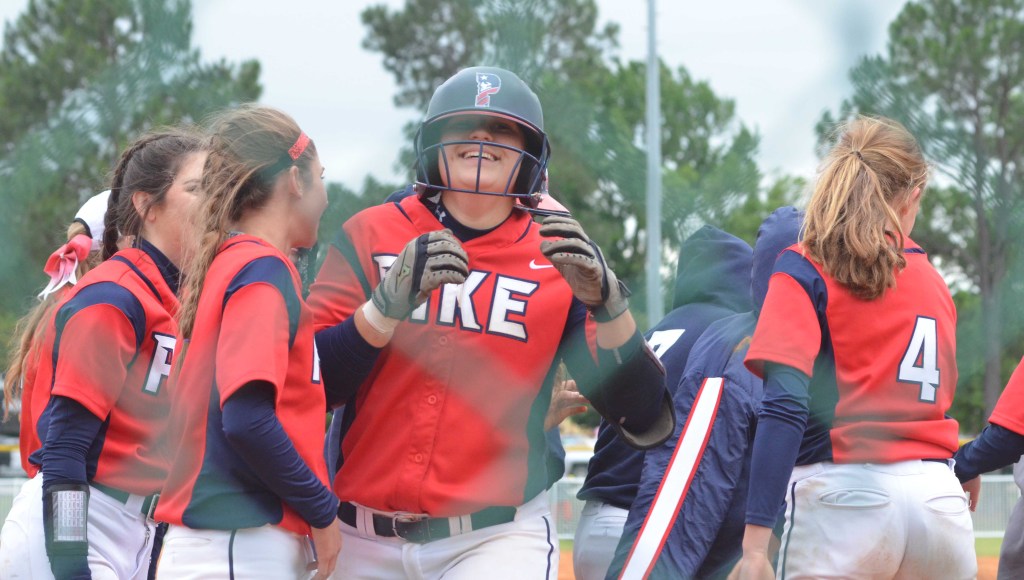 Danielle Brown celebrates after hitting a home run during the state tournament in Montgomery.

With the season now at a close, the AISA All-Star Game takes center stage with three members of the Pike Lady Patriots on the roster.

Danielle Brown, Katelyn Dendy and Haleigh Dewberry will be part of the National squad on June 6 at Lagoon Park in Montgomery.

Lagoon Park will host the junior game at 5 p.m., which will feature Dewberry and Dendy with the senior game, featuring Brown to follow shortly after.

There will be a homerun derby beginning at 4:10 p.m.

“It’s great for the girls,” said Patriots head coach Robert Rollan. “They put in a lot of hard work. They all have really good numbers. There were a large number of girls that were entered in.”

Northside took the area championship this season, giving him the opportunity to pick his squad for the all-star game.

“We were represented by Northside and he remembered our girls and picked the one’s that represented so well,” Rollan said. “I am excited about it and excited they did so well.”

“It’s great for Danny,” Rollan said. “She is such a hard worker and a team player. She is very team-oriented in everything she does and she is concerned with the team and how they are doing. She is constantly trying to figure out what we could do better as a team.”

Dendy improved as the season went along in 2017.  She finished the season with a .310 batting average with 13 doubles and three triples.  Dendy made the switch to the outfield during the season.

“She started out a little slow and then hit her stride in March,” Rollan said. “She really started putting up numbers and she started to hit the ball. She got comfortable at the plate.

“We started her at third base, but there was a need for someone in the outfield…she said sure, whatever. She went out there and did a good job for us.”

Dewberry came over from Zion Chapel and quietly put up strong numbers for the Patriots. She hit .481 with 36 RBIs.

“She was a big surprise,” Rollan said. “You really didn’t realize she is doing as well as she does until you look at the numbers. She does things very steady and is constantly hitting the ball and playing good defense. Unless you look at her stats, she can kind of put you to sleep.”