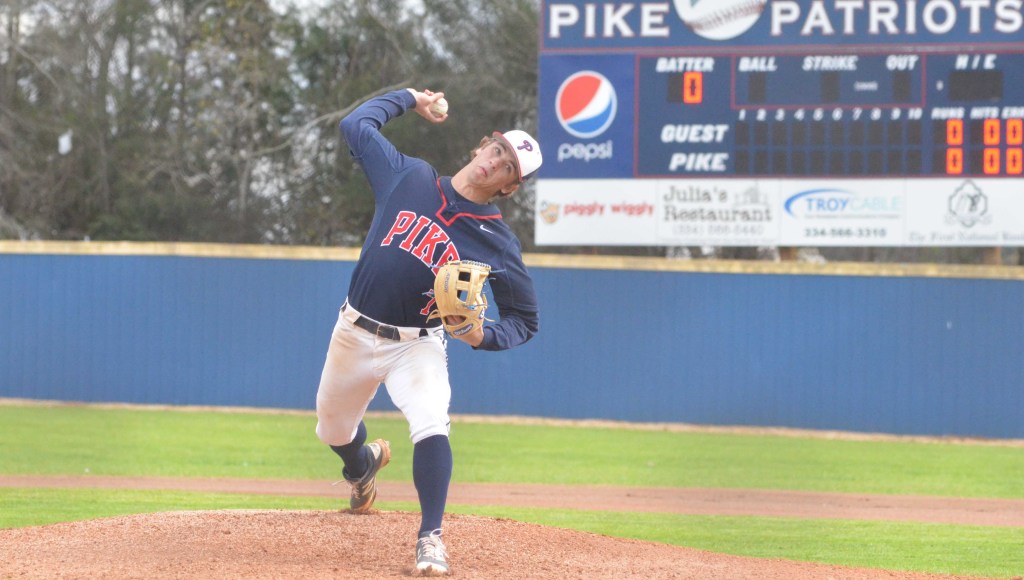 Messenger Photo/Mike Hensley Reece Burbage (above) and the Pike Patriots travel to Montgomery today to take on Glenwood in the AISA Class 3A State Championship.

The Patriots are ready to hit the field for the chance of winning their first state title since 2012.

“Everybody is excited. It’s a big game,” said Patriots head coach Allen Ponder. “It’s a big game for the school and for the community. The biggest thing for us is not to blow this thing out of portion and treat it just like any other game.”

The Patriots haven’t been to the state finals since they last won it in 2012 and fell in the second round of playoffs a year ago. Coach Ponder knows emotions will be high. “That is tough. At the end of the day it’s all about the kids going out there and relaxing,” Ponder said. “Obviously we are going to have a big crowd on both sides and we are playing a very good opponent in Glenwood. It all comes down to us performing. We have had a good week of practice and I think we are relaxed and ready to go play a game.”

Unlike his players, Ponder has experience in state title games. He coached Lakeside to a state title in 2013 and knows well the ins and outs of participating in the finals.

“The biggest difference is the crowd is going to be in every pitch of the game,” Ponder said. “In these games there is never a dull moment. That makes it exciting for the kids.”

Glenwood has won state in two of the last three years and five in the last eight years.

“Glenwood is always a good challenge,” Ponder said. “Tim Fanning always does a great job with those kids. They are so well coached and are very fundamental. We are excited about the challenge but we understand it going to take a very well-played game to win.”

Game one between the Patriots and Gators is scheduled for 10 a.m. with game two following shortly after. If a game three is necessary it will be played on Thursday.