Down to eight: CHHS ready to take part in state quarterfinals 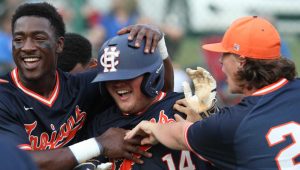 Photo/dan smith
The Charles Henderson Trojans will take part in the Class 5A quarterfinals on Friday in a best two-out-of-three series with the No. 2 Faith Academy Rams. Game one is scheduled for Friday at 5 p.m. at Hogans Hole with game two to follow shortly after.

There are only eight remaining Class 5A teams that will lace up their steel spikes Friday for the third round of the AHSAA state playoffs, and a strong, energetic crowd is expected for Friday’s matchup in Troy between Charles Henderson High School and the No. 2 team in the state, Faith Academy of Mobile.

As the number of teams remaining becomes less and the level of competition increases, seating traditionally gets harder to find at Hogan’s Hole on the campus of CHHS. The Trojans, 20-11 on the season, have advanced to the third round with wins over Dallas County and Valley, while Faith has defeated Marbury and last week knocked off the No. 1 team in the state – Briarwood Christian – dropping the first game 6-5 and winning the next two by scores of 1-0 and 6-0.

CHHS first-year Head Coach Josey Shannon said his ball club has had a great week of practice, and while many may see Faith as a strong favorite, Coach Shannon and his men believe they are going to give faith a challenge.

“I feel good about where our team is at right now,” said Coach Shannon. “We are loose, focused and confident. The practices this week have been going really well and we have been tweaking some things. For instance, just being able to prepare for the type of pitching we will face against Faith Academy. It’s been a lot of fun, the kids are real excited about this opportunity. In a game like this, it’s not won on paper.
“If you look at things on paper with won-lost record and things like that, you may get discouraged some times. But it is no different than Troy University playing Clemson in football, fighting them tooth and nail and Troy should have won that game. It’s not always a given, because Faith is the No. 2 team in the state that they are going to come in here and roll over. I kind of hope they think they are overlooking us and this is just a little bump in the road. I think they will be surprised when they see our enthusiasm and our confidence.”

The Rams have relied on three quality, hard-throwing pitchers in senior righty Jamison Morris, junior right-hander Gabe Shepard and junior lefty Reece Ewing. In game 2 in Mobile this past weekend, Shepard struck out 15 Briarwood batters while firing a one-hitter.

“It’s obvious if you are in the third round you have a pretty good club,” said Coach Shannon. “If you make it this far in 5A baseball you know they are going to be talented. They are strong behind the plate, with a real good, solid pitching staff. They have a lefty that is crafty, and a righty that is a hard-throwing power guy, and their third guy throws strikes and competes.

“Like I told my guys, this is the fourth time I have been to the third round in the last 15 years. In other words, it does not happen every year. I really wish our fans would come out to support the kids and show they appreciate the hard work and commitment they have given over the years to this program. I would say Faith Academy’s fans are going to pull up in buses. There were easily 800 people at their game last Saturday.”

The first game Friday is set for 5 p.m. at Hogan’s Hole on the campus of CHHS, while the second game will follow at approximately 7 p.m.