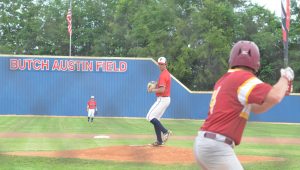 Photo/Mike Hensley
Reece Burbage had a complete game shutout win over Morgan in game one of Wednesday’s double-header. The Patriots swept the Senators, punching their ticket to the state championship next Wednesday.

The Pike Patriots punched their ticket the AISA Class 3 State Championship after sweeping Morgan Academy 2-0 and 7-3 on Wednesday.

The Patriots hope to win their first title since 2012 when they go up against the winner of Glenwood and Monroe next Wednesday in Montgomery.

“We are so blessed,” said Patriots head coach Allen Ponder. “I am blessed to have the opportunity to coach this group of young men. They have made so many improvements this year. They continue to get better each game this year.

“I just feel like this is where it’s supposed to end, at Patterson Field with a chance to win a state championship.”

Reece Burbage got the Patriots off to a good start in game one, throwing a three-hit shutout while picking up eight strikeouts.

“Reece is the tone-setter,” Ponder said. “He sets the tone for the day. We expect him to complete the game every time. He went out there and competed, and he had good stuff today.”

The Patriots picked up eight hits in the win led by Hunter Jones and Wood Jinright, both with two hits.

The Patriots did all their scoring in the second inning. Tristan Carter had a base hit to score Wood Jinright and Jade Sikes scored on a throwing error to give the Patriots a 2-0 lead.

The turning point of the game occurred in the fourth inning when the Senators loaded the bases with nobody out. Burbage started a 1-2-3 double play and picked up a strikeout to get Pike out of the threat.

Reed Jinright took the ball for the Patriots in game two and although he struggled early, he managed to pitch all seven innings while giving up three hits.

“He struggled early and he’ll tell you he struggled,” Ponder said. “We talked about it after the first and second innings and he did a good job at competing and being a bulldog for us.”

Wood Jinright had two of the eight Patriots hit in game two, while Jones, Cole McWhorter, Cody Hollis, Reed Jinright, Trevor Barron and Tyler Hussey each had one.

The Patriots took the early 1-0 lead in game two. Reed Jinright grounded into a double play, but scored Cody Hollis from third base. The Senators were quick to respond in the bottom of the first inning when they scored a run on two hits.

The Senators picked up back-to-back hits off the wall in left field and scored three runs in the second to take a 3-1 lead.

The Patriots used strategic base running in the fifth inning to tie the game. With two outs in the inning, Cody Hollis advanced to third on a steal. Jones followed suit and advanced to second on the next pitch. Reed Jinright singled to left center to send the Patriot faithful to their feet.

With Cody Allen and Wood Jinright both in scoring position in the sixth, Trevor Barron smacked an RBI single to give the Patriots their second lead of the game at 5-3.

The Patriots picked up two insurance runs in the seventh to put the game out of reach. Hussey singled in Jackson Blair and Sikes drove in Hussey on a single for the final run.

Game one for the Patriots is scheduled for 10 a.m. Wednesday at Patterson Field in Montgomery.