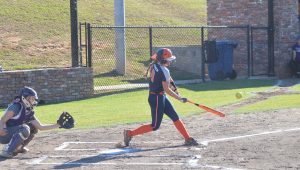 On a night when they honored lone senior Lindsay Fox, the Charles Henderson Lady Trojans defeated their rival Pike County 10-0 on Tuesday night in Troy.

“We did good,” said head coach Robin Snyder. “I was pleased overall. We scored runs in every inning other than one. We need to be more disciplined at the plate and swing at our pitchers, but overall I was pleased.”

Molly Kate Sanders got the ball as the Trojans starter. She pitched the game’s first four innings and allowed just three hits. Emma Kirkpatrick pitched the final two innings without allowing a hit.

The Bulldogs finished with three hits in the game by Destiny Flournoy, Akiyah Peterson and Senkethia Thompson.

The Trojans tallied 10 hits led by Whitaka Lowery who went a perfect 4-4 with 4 RBIs. Tucker Earles finished with two hits, while Kirkpatrick, Rose Snyder, Sidney Armstrong and Fox all had one.

The Trojans scored in the first 3 innings of the game and stormed out to a comfortable 5-0 lead over the Bulldogs on Tuesday evening.

The Trojans cracked the scoreboard in the first inning when Lowery hit a two-out single to score Armstrong, giving the Trojans a 1-0 lead.

Earles led off the second inning with a single and came around to score on a Bulldog error to double the Trojans lead to 2-0.

The first five batters reached for the Trojans in the third inning and they were able to stretch their lead out to 5-0. Armstrong ripped a double to score Snyder. Lowery followed up with an RBI single to score Armstrong and she came around to score on a single by Fox.

After a scoreless fourth inning, the Trojans tacked on three more runs in the fifth to extend their lead to 8-0.

Lowery doubled in Armstrong for the inning’s first run and came around to score on an error by the Bulldog catcher Raeleigh Beaty. Fox scored the final run of the inning on a groundout by Sanders.

The Trojans ended the game in the sixth inning when they added two more runs to bring the score to 10-0.

Kirkpatrick scored on a single by Snyder and she came around to score on a double by Lowery.

Pike County will begin area play on Thursday at Providence beginning at 3 p.m. against Daleville

The Trojans will be back in action on Wednesday when they begin play in the area tournament against the winner of Brew Tech and Greenville.

“I hope this catapults us into playing good ball,” Snyder said. “We played good defensively. Our pitching and defense goes hand in hand. As long as we have good defense, we have a chance to win a ball game. We have the offense to score runs, we just have to play good defense behind the pitchers and help them out.”