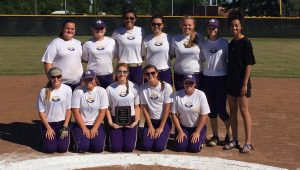 Photo/Mike Hensley
The Goshen Eagles claimed the 2017 Class 2A Area 6 championship on Tuesday when they swept the Luverne Tigers 17-1 and 13-3. The will take part in next week’s regional tournament at the Troy Sportsplex.

The Goshen Lady Eagles secured the area championship over Luverne with a 13-3 win over the Tigers on Tuesday afternoon.

Following a 17-1 win over the Tigers in game one, the Eagles kept the foot on the gas pedal to claim the Class 2A Area 6 crown.

“I am very proud of them,” said Eagles head coach Amy Warrick. “They came out and were calm and they hit the ball. The pitchers did excellent. I was proud of everything they did.”

Sydni Garrett picked up the win in game two for the Eagles after going all five innings and allowing just the three runs.

“She looked great,” Warrick said. “She was nervous at first, but she calmed down and looked good.”

The Eagles finished with 15 hits led by Hannah Calhoun and Kate Warrick, who both picked up three hits.

After falling behind early 3-0, the Eagles got on the board in the second inning when Avery Henderson picked up a two-out single to score Megan Tillery bringing the score to 3-1 after two.

The Tigers attempted to get that run back in the third when two straight batters reached to start the inning. Garrett battled back and got the next three on a pair of groundouts and a strikeout.

The Eagles carried that momentum into the bottom of the third and scored seven runs to take an 8-3 lead.

“I never say any of them get nervous,” Warrick said. “They didn’t push. We had good quality at-bats and we waited to hit strikes. They did everything right.”

Garrett had an RBI double to score Warrick; Brooke Bennett reached on an error to score Garrett, Tillery and Lydia Harrison had an RBI single and Calhoun followed up with a two-run triple to score Abby Jacobs and Harrison. Warrick closed out the inning with a double to left to score Abbie Campbell.

The Eagles batted around in the fourth inning and broke the 10-run lead threshold when they scored five runs to take a 13-3 lead.

Harrison singled in Bennett, Campbell followed up with an RBI single to score Tillery. After Henderson drove in a run on a fielders choice, Calhoun followed up and smacked a double to left to make it 12-3. She later came around to score on a throwing error.

Hannah Calhoun got the start in game two and although the offense stole the show by scoring 17 runs; it was Calhoun that held the Tiger offense at bay by allowing one run.

“Hannah did a great job,” Warrick said. “She put the ball exactly where we wanted it. She did a beautiful job on the mound. She kept her composure calm and let her defense work behind her.”

The Eagles had 14 hits in game one with Gibson and Bennett each having three hits.

The Eagles will head to next week’s regionals beginning at 3:30 at the Troy Sportsplex.

“I just hope we keep playing like we have been playing,” Warrick said. “We have had to get stronger mentally and so they can’t get rattled. We are going to stress that this is just another tournament.”