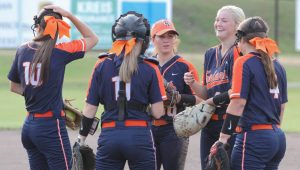 Photo/dan smith
The Charles Henderson Lady Trojans will begin play in the area tournament on Wednesday afternoon when they host the winner of Greenville and Brew Tech at noon.

For the first time in over a decade the Charles Henderson Lady Trojans will host an area tournament beginning Wednesday afternoon.

After winning the regular season area championship the Trojans have earned a first round bye and will take on the winner of Greenville and Brew Tech beginning at noon.

“We are very exciting to host area,” said Trojans head coach Robin Snyder. “It’s very important (to host the area); it’s been 10-15 years since we have hosted an area tournament. That is a big deal for the girls. It was one of our expectations at the beginning of the season.”

The Trojans know that hosting an area tournament doesn’t matter if they don’t finish in the top two spots in the tournament. The top two teams will advance, while the third place team will have their season come to an end.

“Our expectation is wining the area tournament,” Snyder said. “In the first round of the regionals you would be the home team hosting an area runner up.”

Snyder feels like his Trojan ball club is playing its best ball of the season heading into the area tournament after starting the season with inconsistent play.

“I think we are playing good ball right,” Snyder said. “We still have some areas of our game that we need to improve on and iron out in order to get to state. If we can play a complete game and do the things we are capable of doing, then I think we can reach our ultimate destination.”

Snyder has noticed a fight in his team since during the second half of the season. No matter the score, his team has continued to fight to the end.

The Trojans will look to Molly Kate Sanders and Emma Kirkpatrick to lead them on the pitcher’s mound during the tournament.

“Our pitching staff has done a good job all year at keeping us in games and giving us an opportunity to win ball games,” Snyder said. “With us pitching is important, but defense is just as important. Our pitchers are going to throw strikes and get batters to hit the ball. We have to play defense behind them.”

Consistency is the name of the game when it comes to the Trojans at the plate. Snyder hopes and believes his team could be a constant force at the plate.

“We are hitting the ball,” Snyder said. “It would be nice if we were a little more consistent throughout a game. We have cut down on strikeouts a lot. Any time you can put the ball in play it’s a lot easier when you give them an out with a strikeout.”