Lady Patriots wrap up No. 2 seed in state tournament 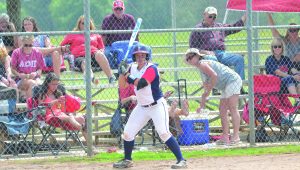 Messenger Photo/mike hensley
The Pike Patriots fell to Northside Methodist in the finals of the Regional Tournament on Friday. The second place finish ensures them a two seed in next week’s state tournament.

The Pike Lady Patriots claimed the second seed in the upcoming state tournament on Friday afternoon. The Trojans began the day defeating Monroe Academy 4-3 before falling to Northside Methodist 4-2 in the regional championship.

The Patriots will travel to Montgomery’s Lagoon Park on Friday for the opening round of the state tournament. Time and opponent is still to be determined.

“It was a great day, just a great day,” said Patriots head coach Robert Rollan. “We came out against Monroe and accomplished the goal of beating them which put us against Northside. We played a really good game against them against one of the better pitchers in the state.

Dannah Dawson picked up the win for the Patriots in game one and although Meagan Faulk picked up the loss in game two she held the Knights offense to just four runs.

“With pitching you have to hit your spots,” Rollan said. “As long as you hit your spots you have a chance to win. They made their hitters hit our pitches.”

The Knights stole a run in the bottom of the second to take a 1-0 lead. With two outs and a runner on second base, Faulk walked a batter on a pitch that went flying to the backstop. The batter slid into second base and the runner at third base came home on the throw.

The Patriots attempted to tie the game in the third inning when Emily Williamson reached second base with two outs. Leadoff hitter Bundy strolled to the plate and struck out to end the threat.

The knights added one more run in the third inning before the Patriots cracked the scoreboard for the first time in the fourth.  Dewberry reached with a  two-out single and came around to score on a single by Phelps to bring the score to 3-1.

The Patriots were able to inch their way a bit closer in the fifth inning. Emily Williamson reached base on a two-out walk and came around to score on a single by Faulk to bring the Patriots to within one at 3-2.

The Knights added an insurance run in the bottom of the sixth when they had three hits including a two-out single to bring the score to 4-2.

The Patriots got a two-out double by Dannah Dawson in the seventh, but couldn’t scratch across another run.

Dawson earned the win for the Patriots in game one by throwing all seven innings, allowing three runs on nine hits. The Patriots finished with 10 hits led by Faulk who finished 3-4. Dewberry and Phelps each finished with two hits a piece.

Dewberry gave the Patriots the quick 1-0 lead in the first when she singled in Morgan Bundy.

After Monroe tied the game with a run in the second, the Patriots got an RBI single by Phelps to regain the lead.

Monroe scored a run in each of the next two innings to take a 3-2 lead. The Patriots took the lead for good in the fifth when Dewberry grounded out to shortstop to score Bundy and Phelps singled to center field to score Faulk to give the Patriots the 4-3 lead.