Stell finished with a round one score off 88 and followed that up with an 84 on championship Tuesday, giving her a combined score of 172.

“I was really excited about it,” Stell said. “I really wanted to end my high school career with a win. It’s great to get the championship and bring it back to Pike. Hopefully there will be more.” 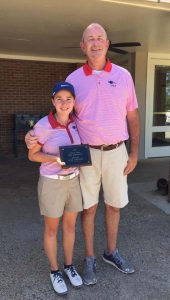 Per usual, Stell elected to play from the boy’s tee box during the championship, making an already long course, longer.

“It was a challenging course,” Stell said. “Some of the holes are long and you knew going in that you needed to have a plan going in. You had to know how to play the course.

The plan for Stell going in was to be accurate with her drives, setting her up for the always-important approach shot.

“I thought the best part of my game was driving,” Stell said. “You really have to keep it in the fairway and I though I did that well.

“Your approach shot is very important, because you want to set yourself up for a birdie,” Stell said. “The greens were playing hard this year, so you had to pick where you wanted to land the ball.”

Stell signed a golf scholarship with Faulkner University in November and she hopes this win will give her momentum as she begins her collegiate career.

“I hope to keep the momentum going.” Stell said. “I need to keep practicing and working hard. Hopefully I can bring some of the hard work to practice at Faulkner.”