Despite early adversity, Trojans aiming for deep run in playoffs 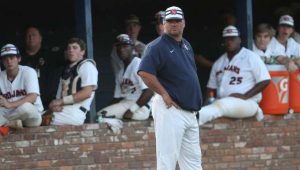 Messenger Photo/dan smith
Head coach Josey Shannon and the Charles Henderson baseball team faced their share of adversity this season. The Trojans will take on Valley this afternoon in the second round of the state playoffs.

The Charles Henderson Trojans played a team from each of the seven classes during the 2017 season and head coach Josey Shannon believes it has paid dividends.

The Trojans started the season by losing seven of their first 10 games, leaving many to wonder what type of season it would be for the Trojans.

The Trojans rebounded and are now heading to play Valley for the second round of the AHSAA Class 5A state playoffs.

Shortly after Shannon was hired, the Trojans had to scramble to put together a schedule for the season. The finished product featured 11 opponents outside class 5A– including three from 7A.

“I had to go with what was out there and what was open,” Shannon said. “It was an unfortunate and fortunate situation in the same breath. The teams we scheduled late were powerhouses.”

After the slow start, the Trojans won 15 out of their last 16 games to finish 18-11. Before the Trojans turned the corner, the first year head coach and the Trojans faced a lot of adversity.

“It was tough on the players,” Shannon said. “People in the community start talking and wondering who did they hire. It was hard for me to keep saying we will be fine. The hard part was keeping the kids believing that what we were doing was right.”

The Trojans had 16 teams on their schedule make it to the post season in 2017 and of the 16, nine of them advanced to the second round with the three 7A schools yet to start.

“It gives you confidence knowing that we have seen the top arms from 1A all the way up to 7A,” Shannon said. “We have experience against the average arms and the great arms. We have played teams like G.W. Long who don’t make any errors.”

The Trojans took on nine different teams that finished the regular season ranked in the top 10 including G.W. Long who finished number one.

“Subconsciously, I think it gives our boys some confidence,” Shannon said. “Knowing that we have faced some of the better competition in the state and we survived. We were exposed to really good teams and we had to fight and claw to get the win.”

Shannon believes the turnaround came in the Fort Payne Tournament over spring break when the Trojans finished 3-1 ever since his players have played with a chip on their shoulder and have played their best ball of the season.

“I had a conversation with my players around the time we were 8-8,” Shannon said. “Everywhere I went I heard Charles Henderson is having an off year. I told the kids not to listen to the things people are saying. We work hard and we do the right things.”

After starting the season so slowly, coach Shannon knows it’s not how you start a season; it’s how you finish.

“I told them the naysayers are talking about us not being very good,” Shannon said. “It’s not how you start; it’s how you finish. You always shut the critics up with success.”

The Trojans and Rams will begin play in game on this afternoon at 4 p.m. with game two to follow shortly after. If game three is necessary, it will be on Saturday at noon.