Patriots ready for Lee-Scott in second round of playoffs 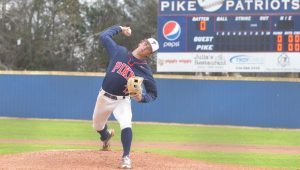 Messenger Photo/Mike Hensley
The Pike Patriots earned a first round bye after winning their area championship. They will take on Lee-Scott in the second round of the state playoffs beginning today at 4 p.m.

The regular season has come and gone for the second-ranked Pike Liberal Arts Patriots and now they turn their sights on the postseason when they take on Lee-Scott this afternoon.

After winning their area during the regular season, the Patriots earned a first-round bye in the state playoffs. It’s been over a week since the Patriots played their last game and they are ready to hit the field.

“We are used to playing three to four games a week,” said Patriots head coach Allen Ponder. “It’s a big change when you have a two-week break. We were fortunate to mix in a game in between. I wouldn’t say our guys are anxious as much as they are excited and ready to play.”

The game the Patriots scheduled to help bridge the two-week gap was against then third-ranked Macon East. The Patriots were able to win 6-1.

“That was the main reason why we wanted to schedule that game,” Ponder said. “We wanted our guys to get some work in against some live pitching, but at the same time you want to win that game. We wanted to go in on a winning note and we played a good game.”

The Patriots finished the regular season with a 23-7 record. Pitching was a point of emphasis all season long for the Patriots. Reece Burbage, Jade Sikes, Reed Jinright, Tristan Carter and Clay Barron have led the Patriots all season long on the hill and they will be looked to once again to lead them in the postseason.

“That is always big,” Ponder said. “When you enter a best of three series, you have at least three arms in case you run into any unforeseen issues. I feel like we have three to four, maybe even five arms that we can count on. That is a great luxury to have.”

On the offensive side of things the Patriots have focused on small ball and running the bases efficiently, something they don’t plan on changing.

“We are not going to change offensively,” Ponder said. “We are going to keep the same mindset and go out and try to hit the ball hard. We are going try and move runners over and play fundamental small ball.”

The Patriots are expecting a hearty challenge from Lee-Scott come this afternoon.

“Lee Scott always presents a challenge,” Ponder said. “They are extremely well-coached. We expect nothing less, they are going to come in and throw strikes and play well defensively.”

First pitch is scheduled for 4 p.m. this afternoon with game two to follow shortly after.