Patriots sweep: Patriots down Eagles in opening round of playoffs 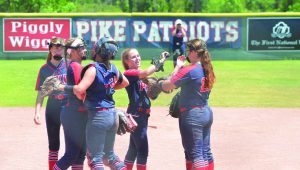 PhotoMike Hensley
The Pike Lady Patriots swept a best two-out-of-three game series over Fort Dale on Tuesday afternoon to advance to the regional tournament at the Troy Sportsplex beginning on Thursday.

The Pike Lady Patriots have advanced to the regional tournament after sweeping a best-two-out-of-three series with the Fort Dale Eagles Tuesday afternoon.

The Patriots jumped out to an early lead and rode it to a 9-4 win in game one. The Patriots picked up a seven-run second inning in game two and ended the series with a 12-6 win.

“I liked the fact that we scored right out the gates in both games to put the pressure on them,” said Patriots head coach Robert Rollan. “We played defense as well as we played all year long. We didn’t panic when they got runs and hits. We just played two really good ball games.”

The Patriots benefited from big innings in both games on Tuesday. The Patriots scored at least three runs in three separate innings, including the seven runs in game two.

Haliegh Dewberry got the win for the Patriots in game one after pitching four innings and allowing four runs. Dannah Dawson cleaned up the remaining three innings, allowing three hits while striking out three.

Maggie Phelps led the Patriots at the plate going 3-4 with one RBI. Dewberry went 2-4 with three RBIs.

The Patriots picked up an RBI double by Dewberry, an RBI single by Phelps and sacrifice fly by Callee Jinright to give them a 4-0 lead heading into the second.

They added another run in the second on a Dewberry single to go up 5-0.

After the Eagles scored their first run in the third, the Patriots put the game away with a three-run third inning. Phelps came around to score on a bases-loaded walk by Emily Williamson and Morgan Bundy singled in Jinright and Jordan Grice to put the Patriots up 8-1.

The Eagles had a three-run inning of their own in the fourth before the Patriots scored the final run of the game when a pitch hit Brown.

Dawson earned the win for the Patriots in game two. She allowed four total runs in six innings of work on eight hits, while striking out six.

The Patriots will play Monroe to begin the regional tournament at the Troy Sportsplex. First pitch is scheduled for noon.

“We have played them twice; they have a good team,” Rollan said. “They are better than they were last year. We have to play a complete game to beat them. I think we can beat them, but it doesn’t matter what I think.”